Guangdong Anti-Smoking Campaign Compares a Penis to a Gun 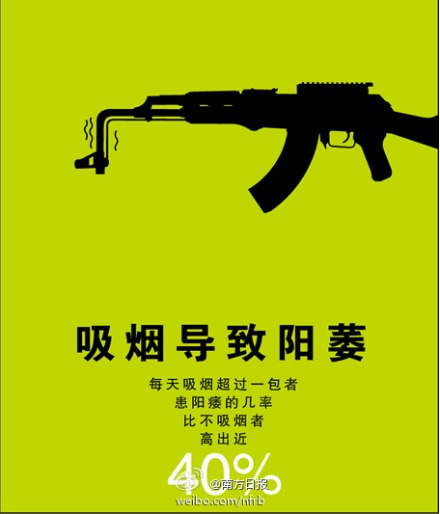 If you’re not familiar with reading Chinese, you may see the above graphic and think, “Oh, it must be a factoid about guns or gun violence.” And why not? It has a gun with the barrel bent down, and the statistic of “40%”, so it’s only reasonable to assume there must be a correlation between all these things.

However, that’s not what the graphic says. Translated from Chinese, this is what’s written:

Maybe the cultural divide is still too great and the message still isn’t getting through, so we’ll bluntly put it this way: this anti-smoking campaign is comparing men’s penises to a gun, and that smoking will reduce the effectiveness of your substitute killing machine by causing your rigid, burly barrel to go limp.

Just as guns must have straight barrels to shoot out their bullets, we are shown this metaphor that the penis must also remain virile to shoot out its sperm in the proper direction. I mean, just look at those wiggle lines drawn next to the wilting barrel—you don’t want wiggle lines next to your penis, do you?

This graphic was published on the Weibo account of the Southern Metropolis Daily and was accompanied by several fascinating bits of trivia to educate the Guangdong public against the dangers of cigarettes.

For example, quiz yourself with these interesting facts:

Strangely, the NF Daily article linked to by the Weibo post is about adolescent cigarette use and has nothing to do with male impotence, guns or a Robert Rodriguez-type hybridization of the two, leading us to wonder where this gun metaphor came from.

We can only hope that an epidemic of “limp barrels” does not afflict the population of China because there clearly isn’t enough endangered tiger penis and rhinoceros horn to help heal all the crooked shooters in China.

Smoking rules get tough in Shenzhen

Shenzhen is starting to take the lead in restricting smoking in public places. The city has released a list of venues where smoking will be completely banned starting in March, according to Xinhua.

While it might seem like common sense to ban smoking in places like kindergartens and nurseries, Shenzhen does plan to take this a step further in the future. The regulations point out that smoking will be “limited” in other venues such as bars and cafés, but not until 2016.