The first weekend of the year and it’s off to a great start. Here’s what’s happening:

Jan. 3rd – Saturday Salsa Night @ Curv Bar – Make your way down to Curv bar for some Salsa with the Fun Salsa Club.

Jan. 4th – Tap Dance: Rhythm of the Dance – Come experience some true Irish culture through storytelling by song and dance. 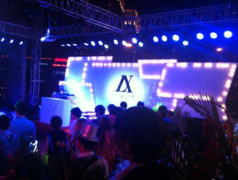 The 2nd Annual SZLM Blues and Folk Festival is underway after a huge opening last night. This year’s festival is aptly named “The Pearl River Delta Sessions” in homage to the Mississippi River Delta area where the Blues music and culture were born. Though miles away from the United States, this five night, four venue and 20 band music festival shares a similar tone with those muddy-bottom Blues.

Shenzhen is a 21st century melting pot with a variety of races and nationalities all finding a way to make it. Like early 20th century America, Shenzhen residents are learning to live together, work together and grow together, and from this a music culture has taken root.

Many venues in Shenzhen are now taking a chance on local artists and opening their doors to talented Shenzhen musicians. The Shenzhen Local Music Blues and Folk Festival, which is set to run until June 9, is the culmination of this community effort to provide a platform for musical expression and connection.

Last night the festival kicked off with well-traveled and seasoned folk music veteran Gary Hurlstone at Brown Sugar Jar. Hurlstone presented the history of folk music through short films, pictures, stories of his travels around the world and within China, and also performed a few original songs. Following his lead, tonight at Frankie’s American Bar, Chicago born and raised Blues man Corey D. Abrams is presenting the history of Blues music and performing a few original songs. Phoning in on Skype around 9:45pm will be Bobby Taylor, the man responsible for finding and promoting many world-famous acts, such as the Jackson 5 and Whitney Houston. This is definitely a Skype call you don’t want to miss.

For full listings of the festival events, check out Shenzhen’s #1 source for live music, shenzhenlocalmusic.com.

See you at the festival!

The Bieb to serenade pre-teen fans in Hong Kong

Hong Kong is about to play host to arguably the biggest superstar on the planet: Justin Bieber. (We used to call them singer/songwriters, but don’t think it strictly applies in this case.)

Judging from the comments posted at CNNGo, he looks to have quite the fan base on this side of the water.

Due in Hong Kong on May 13 at the Asia World-Expo, Justin Bieber will no doubt be greeted by hoardes of screaming fans as soon as he lands in the city, probably including the ladies from the Hong Kong fan club who were lucky enough to chat with him online last year.

But before he reaches Hong Kong, he will touch down in Australia as well as the Philippines as part of his tour in Asia.

Bieber is so famous, he has his own 3D movie — “Never Say Never,” a documentary about his rise from YouTube sensation to international megastar, due to release in Hong Kong on April 21.

If you happen to have a 12-year old daughter, you’ll either want to shield her from this groundbreaking news or get ready to shell out for some likely rather expensive tickets.

As I Canadian, I’d just like to say I apologize. First k.d. lang, then Celine Dion, and now the Bieb.