Back to work, already need an escape. Check out what’s happening:

Oct. 12th – Saturday Salsa Night @ Curv Bar – Make your way down to Curv bar for some Salsa with the Fun Salsa Club.

Oct. 12th – Tunnel Rave by The Real Deal Inc – The Real Deal Inc has some party ideas that feel like those of back home. Their Tunnel raves have been a hit in Shenzhen since the first one about a year ago. Check it out.

Oct. 13th -  Songwriting Surgery @ Xpats – A new night for the struggling songwriter. Come with your music and work on improving it with experienced musicians. if they can’t salvage your song, at least you can drink until it sounds better. Ultimate, as the sport is known, has been gaining popularity in the PRD in recent years, particularly in Shenzhen due to the SZUPA. 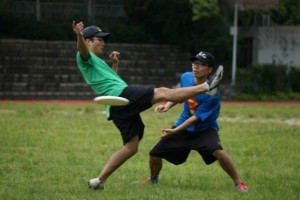 The 2013 Shenzhen Summer League is the first Summer League for the sport in Shenzhen on a full-sized field. Seventy people from around Shenzhen and Hong Kong registered to play and were separated evenly to four color related teams. The teams were the Lao Whites, Blue Wave, the Shenzhen All Blacks, and Team X (Mixed colored uniforms). Over the course of 4 weeks, the teams battled it out with the hopes of improving their skill and having some fun in the sun.

They played every week at OCT Middle School from the end of June through July.  Below is a round-up of the winners.

Week 4 – The Lao Whites claimed their 3rd place ranking by defeating Team X (6-5). The Blue Wave seemed like they would put on a much closer game, but the SZ All Blacks strong defensive game really took the Blue Wave apart for a decisive win (12-4).

Afterwards medals were awarded to the winning team, the Shenzhen All Blacks and each team’s MVP, Most Improved Newcomer and Best Spirit winner, was awarded a prize from The 2013 Shenzhen Summer League’s sponsors, FiveUltimate.com, Little India Shekou, and SZUltimate.com.

Ultimate Frisbee originated in New Jersey in the US. It is a co-ed sport that blends many sports together, including elements of American football, rugby, netball, basketball, and soccer. A standard Ultimate field is 70 yards by 40 yards, with 25 yard endzones on either end making a total of 120 yards by 40 yards. There are seven members per team on the field during game play. Each team is trying to score by catching the Frisbee (disc) in the endzone at the opposite side of the field. The disc can be moved forwards or backwards by throwing and catching only. If the disc is in your possession, you cannot run but can pivot like in basketball when you’ve picked up the ball. If someone runs up to defend you they cannot take the disc out of your hands or hit you as Ultimate is a non-contact sport.

They can however start a count to 10 which if they reach before you throw it is a turnover. A turnover also happens, if there is an incomplete throw, an interception, or if the disc is thrown out of bounds.

If you’re interested in playing, you can visit here.

Shenzhen Beach Luau a blast, with a few hiccups

It was party time last weekend at the That’s PRD Beach Luau, and while most people had fun the party was not without some problems. Let’s get the bad news out of the way first. The buses from Shenzhen left late (which, admittedly, isn’t too uncommon when it comes to Chinese transportation). However, our driver then wasn’t sure how to get to the second pickup point. While we were heading out to Xichong Beach, the announcer on the bus said that no cash would be accepted to buy food or drinks throughout the weekend; instead, people would have to purchase tickets that would be used instead.  Apparently, we would be able to cash in any unused tickets at the end, but unfortunately that wasn’t the case.

There was also some misunderstanding at the venue itself.  Lunch was RMB60 for a set plate of either a beef burger or honey mustard chicken breast.  The sides were a choice of potato chips, salad, or roasted vegetables… or partially cooked onions. The servers weren’t aware that onions were a burger topping, so would provide them only as a side (meaning people couldn’t select an actual side if they took the onions).  This isn’t a huge deal on its own, but was another annoyance on the trip.

For drinks there was a fair amount of different cocktails and soft drinks with different ticket values, and most seemed reasonable. The dinner was supposed to be another set meal choice of a plate of pork from the roasted pig and/or some pasta and salad for RMB100 (which was 10 tickets’ worth). The pig was already cut up, which took away from the idea of having a true Luau-style roast.

However, it wasn’t all bad. In fact, despite the hiccups, a lot of people had fun. The organizers took time to make sure that there were lots of activities available for all to take part in.

Sumo wrestling was a real blast. It was very enjoyable watching people put on Sumo wrestling suits and fight it out in the sand. Many people seemed to take part in this and had fun.

Fusion Fitness and Freshe Fitness lead a few activities on the beach throughout the day. A group for Tug of War as well as Beach Volleyball.

Despite a technical glitch during one large short burst of rain that blew away a canopy and knocked out the music, the DJ’s were actually very good and the sound was loud and clear. The sets were interesting and never did I feel bored by what was being played.

The private swimming pool was a nice touch with the floating beach pillows that people used to race on. The water was noticeably green but we were assured the water is changed often and that the colour was due to it being mountain spring water.

Vedett beer provided a fun little diversion in the form of a free beer chugging competition, but the catch was you couldn’t use your hands. Some people left happy and hammered. A welcome combination at any party.

There were also some beer pong tables set up by the ShenZhen Ultimate Players Association that people were using occasionally through the night. The SZUPA also got a fair amount of people throwing frisbees around on the beach earlier on.

Then it got wild. A red flower watering pot was brought out and three girls and a guy in a sailor suit took part in a wet t-shirt contest. Everyone seemed to enjoy this and this really helped get the partiers dancing to the great DJs.

The party went all night and there was luckily no more rain.

I’d go again just for the beauty that is Xichong beach. All the problems above are fixable for next year.