A garbage recycler in his 60s was beaten to death by two men in a residential building in Huizhou. No one came to the man’s assistance despite the presence of a security camera and security guards watching the feed.

The tragic incident took place on May 28 after 10:40pm in the hallway leading to the garage. Two men, who had arguments over garbage collection with the old man, ran into the victim in the hallway and left nothing to explanation by immediately beating him. Even when the old man collapsed onto the ground, the two men are still seen kicking him, Guangdong TV reported. 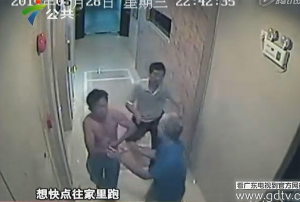 All three men were collecting garbage and plastic bottles for money in the building.

The old man as seen in the video was almost powerless: cornered into the end of the hallway by the two menacing and much-younger men, the old man did not strike back at all. According to the security camera footage, the beating lasted at least a minute and a half. When the old man’s family arrived on the scene, he was found lying on the ground with his head covered in blood, and blood dripping from his mouth and nose. When the doctors arrived, he was pronounced dead at the scene. What most angered Ms Deng, the victim’s daughter, is the fact the assault was fully recorded by a CCTV camera located right above the hallway where the beating happened. It was watched by the security guards, but no one had come to stop the violence. When interviewed for the TV report, one of the security guards claimed they stopped the two suspects outside of the hallway after the beating, and called for police and medical assistance.

The two men were arrested by the police.