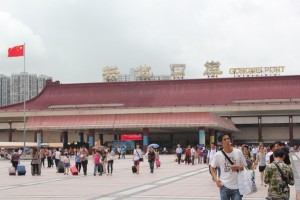 You might be able to speed through Gongbei Port and into Macau soon, as Guangdong appears to be tightening visa requirements for Chinese tourists.

A report from the Chinese-language Macau Daily News cited unnamed sources saying local officials in neighbouring Guangdong could limit the number of Macau visas issued for locals, coupled with a limit on overseas spending on credit cards. Despite its reunification with China in 1999, Macau is still considered “overseas”.

“Recent weakness in Macau gaming revenue and visitation growth could be partially explained by the visa restrictions and reduction in China UnionPay limits highlighted by the Macau Daily,” Cameron McKnight, an analyst at Wells Fargo & Co., said in a June 25 research note.

“The report on visa tightening is a bit speculative,” said Grant Govertsen, a Macau-based analyst at Union Gaming Group. “We haven’t seen anything so far to convince us this is happening.”

“There has been no restriction of visas,” said Gabriel Chan, analyst at Credit Suisse in Hong Kong

Chan said new measures recently put in place should actually should encourage the flow of visitors by making it easier for residents to apply for a visa and lengthening the opening hours of the border gate that connects Macau to the mainland.

The numbers Macau are dealing with are huge, and could affect the gambling-heavy SAR.
From Bloomberg:

Macau casino gambling revenue rose 7.3 percent in May, the slowest pace since July 2009.

About 25 million visitors from Greater China flocked to the specially administered region in 2011 – the only place in China where nationals can legally gamble at casinos – making up about 90 percent of total visitors.

Long queues at the Gongbei border between Zhuhai and Macau are an all too often occurrence as foreigners bemoan the sheer volume of people crowding into the border facility.  Unlike at Lo Wu/Luohu Port connecting Shenzhen with Hong Kong, Gongbei Port often doesn’t differentiate between foreigners and locals, resulting in long queues all around.

The last time local entry into Macau was tightened was back in 2008.