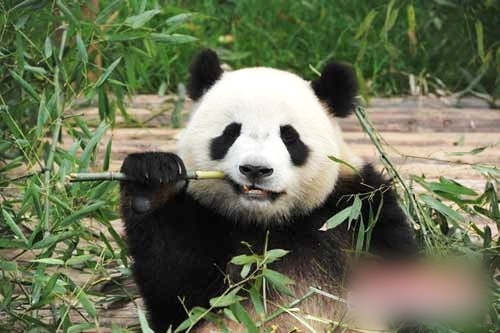 Xinxin the great panda has died in Macau, China. She was six years-old.

A gift of the central Chinese government, Xinxin arrived in Macau on December 18, 2010 in a well-publicized campaign that brought her over in a custom-designed Air China passenger jet. There, Xinxin was a regular fixture at the Great Panda Hall in the Shipaiwan Wilderness Park where she delighted many visitors wanting to catch a glimpse of China’s national/endangered animal.

Xinxin is survived by her partner that was also gifted to Macau, Kaikai. With their names spoken together as “Kaikai Xinxin”, the couple’s name becomes the Chinese word for “happiness”.

It was during a routine checkup in May that staff at the panda center discovered Xinxin was suffering from a kidney problem. Then, as if to exacerbate the situation, Xinxin entered the all-important “breeding season” two weeks ago. At this time, Xinxin became tempermental and lost her appetite.

At a press conference held late last night by the the general office of the Special Administration Region of Macau, it was announced that Xinxin had passed away at 8:18pm on June 22 from a kidney failure.

The Prime Minister of Canada, Stephen Harper, will be making one of his rare visits to China next week when he touches down in Beijing on February 9.

Harper has had rocky relations with the People’s Republic.  He has been known for publicly criticizing China’s human rights record and meeting with the Dalai Lama.  In fact, he didn’t visit China until a full three years after he became Prime Minister, and was berated for it by both President Hu Jintao and Premier Wen Jiabao.  Nonetheless, with minimal growth potential in the US, Canada has realized it needs to look elsewhere for customers.

Harper will first stop in Beijing before flying down to Guangzhou on February 10.  According to sources, Harper will speak at the Canada-China Business Dinner in the capital of Guangdong, an event sponsored by the Canadian chambers of commerce in Shanghai and Hong Kong.  It appears to be his first ever visit to the Pearl River Delta (not including Hong Kong).

While full details of his visit haven’t been released by the Canadian Embassy as yet, it’s expected he will depart Guangzhou for Chongqing, where he is expected to finalize an agreement to bring a pair of pandas back to Canada.