A second sinkhole was discovered in Shenzhen on Song Yuan Road yesterday (February 26), just one day after a sinkhole in the city’s Beihuan Avenue swallowed a taxi, injuring five, China News reported.

The one on the Shenzhen Beihuan Avenue, measuring 10 square meters and 4 meters deep, resulted in five injuries including the driver and four passengers, the newspaper said. No one was injured in the second sinkhole and construction is already underway to repair the road.

The taxi’s left front wheel plunged into the cavity and fell off its axle. The driver was left with a fractured ankle and the four passengers all had different bruises, the report said.

Sinkholes have been plaguing Shenzhen for a while. Last year, 10 sinkholes were discovered in the city causing several deaths and injuries, according to the report.

In addition to water erosion, the sinkholes are caused by the city’s old underground water pipes, according to Shenzhen Water China Group. The water pipes were first installed in the city in 1994, but the company said the shoddy quality of the pipes is leading to erosion.

One netizen wrote: “Shenzhen sinkholes have caused six deaths and seven injuries so far. If you are afraid of talking lifts, you can still use the stairs. But if you are worried about the road, what else are you supposed to do?”

Another one wrote: “The most reassuring thing in the world is keeping one’s feet on the ground. But why do I even have to worry about the ground now?”

Another sinkhole in Shenzhen swallows up two vehicles

Shenzhen has had a startling number of sinkholes in recent months, and now it has another to add to the list: the latest opened up in Yantian District on Saturday morning (Aug. 17) swallowing two vehicles. Fortunately nobody was seriously injured. This one was 30 square metres in size and five metres deep and, like the last sinkhole in Shenzhen at the start of this month, locals had previously warned authorities that something similar was liable to happen and were ignored, Southern Metropolis Daily reports. Local residents near the scene of the sinkhole on Yankui Road had noticed several road signs had been collapsing in recent weeks and that sediment had slid onto a nearby basketball court from the road.

Geng Xueming was driving a delivery truck at 6:15 a.m. when the ground opened up beneath his vehicle. He told reporters that he climbed out himself before calling the police. The vehicles were lifted out by crane and the road was cordoned off.

Deputy Mayor Lu Ruifeng arrived at the scene that afternoon to oversee the investigation, which found the culvert under the road, which was built in 1983, needed to be renovated. A collapsing culvert was also the cause of a sinkhole in Granby, Massachussets in the United States last week.

The Shenzhen Meterological Bureau pointed to the fact that the Xiaomeisha area where the accident took place has seen some of the heaviest rain in the city over the past week, which of course increases the likelihood of a sinkhole.

Headlines were made around the world when a 26 year-old security guard was fatally swallowed up by a sinkhole in Futian District in March and when five died in a sinkhole in Longgang District in May. But, to have a sense of perspective, sinkholes are far from a major cause of death, even in Shenzhen.

Another large sinkhole opens up in Shenzhen

Four people fell in and three were injured when yet another massive sinkhole opened in Shenzhen on Sunday (Aug. 4), this one was over 30 sq metres in size and 1-2 metres deep, Nandu Daily reports. Although fortunately there were no fatalities, there is something extra shocking about this particular sinkhole – locals saw it coming and police ignored their warnings.

It follows the two sinkholes in Shenzhen that made headlines around the world this year: the one in Futian District in March in which the ground disappeared beneath a security guard’s feet and the one in Longgang District in May in which five people were buried alive.

There have also been a number of smaller ones which led to no fatalities, such as the one in June which occurred in a greenbelt in Luohu District.

Sunday’s sinkhole, which opened in Longhua New Zone, saw one of the injured require 9 stitches in his arm.

Due to heavy rain in the previous days, locals sensed there was a chance the road would collapse, so told the police. However, the police dismissed their claims and, lo-and-behold, on Sunday morning the sinkhole opened up just outside 32 Longfa Road.

Two of the injured were staff from the nearby Meijia Suermarket and one of those to fall in was a 12 year-old boy, but he sustained no injuries.

Local officials, such as Longhua Party Secretary Jiang Jianjun, demanded an investigation. However, nobody suggested this would not happen again. 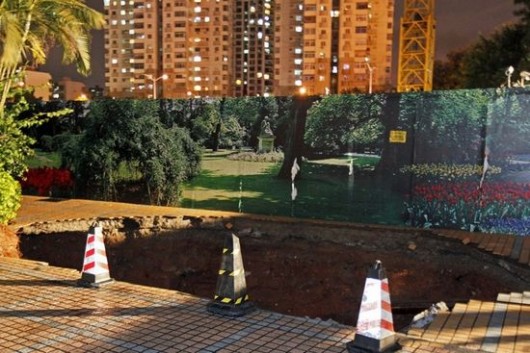