A 7 year-old drowns in Shenzhen, playmates flee the scene

A seven-year-old drowned after accidentally falling into a creek when playing with friends in Pinghu Municipality in Shenzhen on September 16, according to Southern Metropolis Daily.

After police searched the creek next to Pinghu Pingnan Railway, police found the body of the boy, Li Jianping. It later emerged that his three playmates had fled the scene without seeking help or even telling their parents.

When the body was found at 8 p.m., Li had already been dead for three hours, an autopsy showed. The opportunity to save him was wasted, even though there was a vegetable farmer working 30 meters away from the scene of the accident when it happened.

After finishing Sunday lunch, the boys parents had to go to work in a nearby factory and his 16 year-old brother was unwilling to play with a 7 year-old. After returning home for dinner, the parents noticed the boy missing, they asked a neighbour’s 7 year-old daughter where he was, and she said he had fallen into the water.

The family live in a close-knit community of workers from Liuzhou in Guangxi, so neighbours came together to search for the boy.

According to Li’s female playmate, he fell into the creek while they were playing and because he couldn’t swim he was immediately submerged and couldn’t scream for help. She tried to grab him but could not reach.

Their two companions, both boys, then saw the clothes and shoes that he had hung by the side of the water and hid them in a woods some 100 meters away, the children later confessed to their parents.

According to Hong Kong-based child psychologist Yang Guang blamed the tragedy on society’s failure to teach children how to act during a crisis. She also blamed lack of respect for human life in China.

On the evening of the tragedy, Liu’s family burned all of his photographs, saying it would be too painful to look at them.

He was consistently an A-student and was so adorable that his parents’ colleagues often insisted he come to the factory so they could hold him, according to his mother. 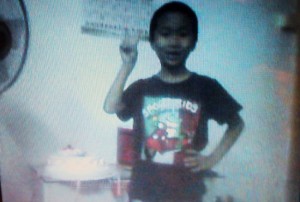