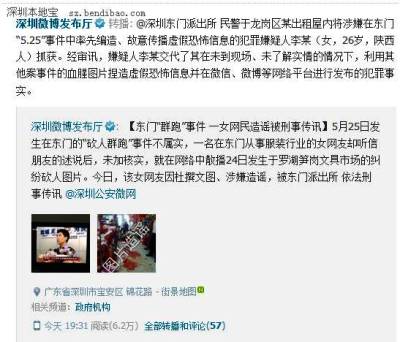 Panic gripped Shenzhen this past Sunday when a rumor started getting passed around that a stabbing incident had occurred at the Dongmen pedestrian walkway. But it was just that—a rumor.

A mentally-handicapped person knocking over a clothing rack was the catalyst that kept spinning into a rumor that a violent knifing rampage was occurring in Longgang District when social media kept forwarding images of a scene of carnage with pools of blood, reports GMW.

On Sunday afternoon, a Weibo user named “candy” sent out the following post:

My goodness, have these (unspecified ethnic group) thugs gone crazy? Knife-wielding attackers have arrived in Shenzhen; everyone going out should use caution! Yesterday afternoon, this pair of (unspecified ethnic group) knife-wielding attackers went into Sungang Warehouse Office Supply Wholesale Market and killed several people, and today there’s another violent incident at Dongmen pedestrian street. Fortunately, I didn’t go out as I didn’t have anything to do. My heart is trembling with fear right now.

That led to other users making unsubstantiated posts of their own like the following:

Police refuted the rumor when it first appeared, but it was two hours before order and calm was restored to the city.

A 26 year-old woman from Shaanxi Province surnamed Li has been detained by police and is facing criminal charges as police continue their investigation.