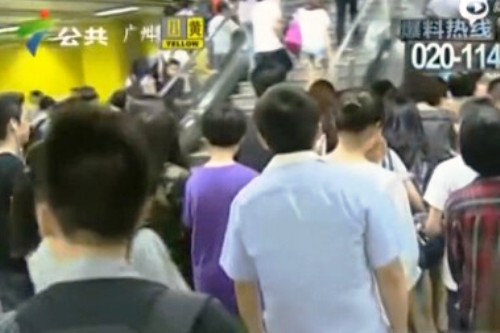 A passenger called out, “There’s a knife attack!” as the subway train pulled into Meihuayuan Station at around 1pm. This caused a surge of people to come from the back of the train, leading to an immediate evacuation onto the subway platform.

The cause of the stampede may be due to a person who had fainted aboard the train.

Ever since a number of knife and bomb attacks throughout the country earlier this year, public anxiety has been high as crowds have panicked while the threat of terrorism remains a hot topic in the media.

One person has been charged with spreading rumors online after Shenzhen crowds panicked when a shelf was pushed down in a subway plaza mall near the Dongmen pedestrian walkway, causing a stampede captured on video.

Commuters ran for their lives from the Guomao Subway Station on Beijing Metro’s Line 1 on June 5, reports Want China Times. The chaotic stampede was later attributed to a fight between two passengers.

Passengers on the Beijing Metro also experienced another panic attack on April 16 when a dispute between two commuters at the Huixinxijie Nankou Station on Line 5 caused a stampede when panicked passengers tried to get off the train too quickly, reports iFeng.