11,000 Extra Police on Patrol in Guangzhou this Labor Day Holiday 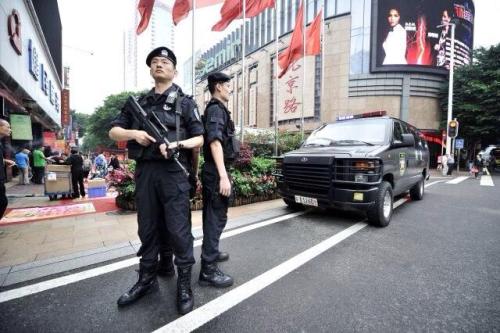 As if to emphasize the need for security after the bomb attack in Xinjiang on April 30, an extra 11,280 police officers have taken to the streets of Guangzhou in armed patrols with sub-automatic machine guns, Guangzhou Daily reports.

The increase in armed patrols was announced earlier, and they are stationed in several important locations around the city. At certain checkpoints, the police presence is bolstered by bomb-sniffing dogs. 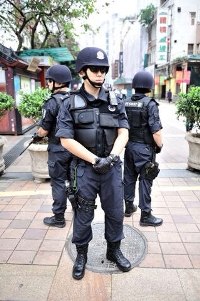 The extra patrols can be broken down to 4,080 police officers and 7,200 deputies.

A police spokesperson justified the increased police presence by bringing up the brawl on Beijing Pedestrian Street, which was stopped by firing two warning shots into the air:

“There is a clear necessity for armed patrols. If the police patrol did not fire their guns into the sky at this time, they would not have been able to gain control of the situation so quickly.”

Police have a number of tools in their arsenal to keep the peace.

From left to right, these are the “eight vital implements” of a Guangzhou patrol officer:

No mention of a notepad with which to jot down important events and names.

If you ever happen to get into a situation where a Chinese police officer points a gun at you and can’t understand what he is saying, here’s a handy guide for you.