Everybody get wet! Dongguan set for annual water fight on March 13

If you’re going out in Dongguan’s Dongkeng Village on March 13 make sure your electronic devices are stored away and whatever you do, don’t wear white. On the second day of the second month of every lunar year, the city marks Body Selling Day (not what you think it is), of which the water fights are now the main part.

According to Baidu Baike, in ancient times peasants in what is now Dongguan would present themselves in the town square on this day to meet the gods. By the late Ming Dynasty (1368－1644), a custom had developed in which those who did not own land would appear in the public square and bow down wearing bamboo hats. Those who owned land would come along and select who to employ for a year, hence the name Body Selling Day.

For reasons that this author cannot quite fathom, the main feature of the modern manifestation of Body Selling Day is a massive water fight in Dongkeng Village. The locals will make a killing from selling water pistols and water balloons, Dongguan Deputy Culture Minister Liu Cheng told Southern Metropolis Daily. 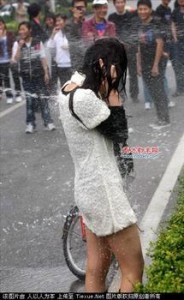 Remember what colour not to wear

Apparently it is good luck to both soak others and to be soaked. People form teams and it gets quite strategic. For obvious reasons, people wearing white are particularly popular targets.

The tradition is part of Guangdong Province’s Intangible Cultural Heritage, so if you soak an expat on that day, just tell them you are providing them with a free cultural experience.