Evergrande to sign Serie A footballer for ‘staggering’ money

After missing out on Bologna’s Alessandro Diamanti, Guangzhou Evergrande are now attempting to sign 25 year-old French winger Jonathan Biabany from Parma. The Serie A team’s president Tommaso Ghirardi described the sum being offered to Biabany as “staggering” and expects the deal to go through, Italian Football Daily reports. 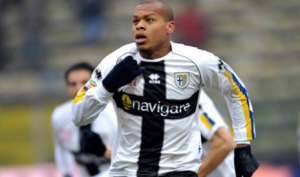 Biabany in action, via Google Images

We all know that China and Chinese football clubs are willing to pay crazy money to become a football force in the world. The biggest success story so far has been Guangzhou Evergrande becoming Asian champions last year with both foreign and homegrown talent.

Although there may be trust issues after the club’s failure to sign Diamanti, Parma appear resigned to losing their man.

Parma manager Roberto Donadoni commented on the situation, basically stating that it’s up to the player now: “Is it a waste that Biabiany might go to China? There are emerging realities, that want to improve and to grow. To do that, you need to search for important players. Everything comes down to a ‘yes’ or a ‘no’ that the player have to say to who is pursuing him.”

There you have it, he is “wasting” his career by accepting “staggering” money.