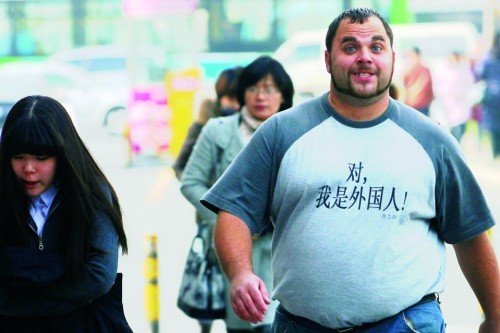 [The following is a blog originally published at Sinopathic on December 23, 2013 as written by terroir, and is reprinted here with permission.]

It’s thrown around by our colleagues, the jianbing seller, taxi driver, your students, and maybe even your friends. Even though it’s such a ubiquitous term, nobody seems to be quite sure what “laowai” really means. Should you feel good to be referred to that way, as a member of a prestigious club? Or should you be taken aback at being singled out as something different?

Some may say that “laowai” is a neutral term that doesn’t contain any inherent meaning other than “foreigner”. If there are any negative connotations in the word, they stem from the context in which the word is used. But this ignores the latent meaning of the word, shrouding it behind the banality of daily repetition that grinds its significance into unfeeling, bureaucratic indifference.

Taken literally, “laowai” written in Chinese is 老外 (lǎowài). Individually, its components are 老 (lǎo) meaning “old”, and 外 (wài), meaining “outside”. “Laowai” most definitely does not mean “foreigner” in Chinese; instead, that term is written as “外国人” (wàiguórén) which is made up of “外国” for “foreign” and “人” for “person”.

There is no English equivalent of “laowai” in English; this mostly stems from the fact that most English-speaking cultures don’t inherently view the world as being divided between themselves and everyone else (most, I said).

There may be some confusion to what “laowai” actually means due to its individual components. “Old” is universally regarded in Chinese culture as a sign of respect. If someone is called “Old Wang”, then the Wangster is a person of a dignified position, regardless of his age. With this same thinking, a “laowai” should be a position that is equally respected—something absolutely true if it wasn’t for the second half of the term, “outside”.

Family is the most important component of Chinese society. As a way to endear themselves to others, many Chinese will address strangers with family roles; for example, to call a fellow man a “哥们儿” (gēmenr) is to afford him the respect of not just a fellow brother, but an elder one. After family, the respect commanded by any one person starts to thin out the further away they are located from the family home: friends, business associates, co-workers, neighbors… until it becomes a question of geography.

Being an outsider is pretty much the lowest scale to occupy on the Chinese social hierarchy. You are not trusted; your customs and habits are strange and unfamiliar; you are the unknown that stands in contrast to the family circle; your existence is a contradiction to all that which is Chinese.

So when when taken together, “laowai” means “respectable outsider” and not the “Hey, old whitey!” that Lonely Planet tried to convince me of at a more naive stage of my stay here. One could take it as as a backhanded compliment if one enjoys masochism in their majesty, but the word “laowai” is basically a system of control to always alienate a foreigner. No matter how well you speak Chinese, no matter how much you pander, no matter how much you love China – you don’t belong.

Editor’s note: If you’re still not convinced, we’ve found a very simple process to both confirm the opinions expressed here as well as to give yourself the social advantage anywhere in China. Please use responsibly.

Top 10 Complaints Chinese Women Have About Their Foreign Boyfriends