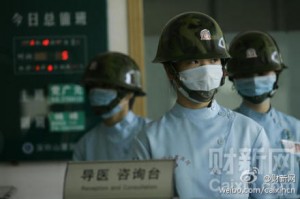 A patient of the Shenzhen Pengcheng Hospital went on a slashing spree around 10am on Monday, attacking his doctor, nurses and a security guard who were on shift at the time.

Police say the 20-year old entered the building with a knife shortly after 10am, according to Caixin, and went up to the 2nd floor.  Witnesses say he began waving his knife around, and stabbed a doctor in the head, assistant doctor, nurse, and security guard who were all working at the time.  All four of them were injured.

The doctor, in his 30s, suffered the most serious injuries although they are not life threatening.  The other three suffered from slashes to their hands.

Police believe the knife-wielding man is one of the hospital’s patients, and attacked his doctor for failing to cure his rhinitis.  He was later arrested by Shenzhen police, and the case is now under investigation.