This was made publicly known after a university student surnamed Li was randomly clicking through the website in the hope of finding a job in the bureau. Little did he know when he clicked on a link to Huidong No. 2 People’s Hospital, one of the bureau’s subsidiary units, he hit the motherload: pictures of scantily-dressed women in racy positions, and Chinese ads for naked chatting and prostitution. This obscene content was planted in notable places on the page, according to descriptions from Nanfang Daily. 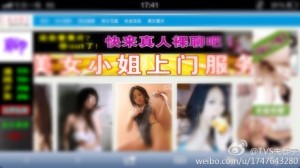 A random click onto any linked picture shown on the website leads you into something that’s even “more obscene to the eye,” according to the report. How obscene it is? We will leave that to your imagination. But it’s so obscene that Li believed that his computer had gotten infected with some kind of virus. Days later, the contents were still there, Li said.

When contacted by a journalist about the “extra health services”, the bureau said they were completely in the dark about the situation and claimed the site was hacked. The bureau stated they had reported the matter to the local police.

Next time, don’t blame bureaucracy for slow service at the health bureau. Bureaucracy itself is hampered by health officials cowering behind their computer screens and watching…well you know what.