A disabled man was forbidden from carrying his own severed leg as hand luggage at Guangzhou Baiyun Airport on Monday (February 25), Eastern Satellite Television reports. 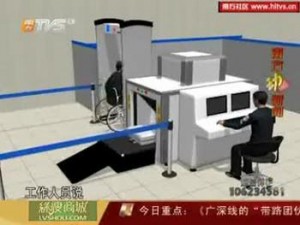 A recreation by Eastern Satellite Television.

Shortly after 12 p.m. the wheelchair-bound Mr Huang, whose flight was destined for Chongqing, put a foam suitcase through the scanner. Security guard Ou Yuming saw through the x-ray what was unmistakeably the stump of over half a human leg.

Security guard Ren Xiang told reporters that when he confronted Huang, the disabled man explained that it was his own leg that he had lost in an accident. He needed to transport it back to his family because in his home town’s traditional beliefs, when a person dies, their whole body must be buried intact.

However, because he did not have a permit from a hospital, Huang was not allowed to transport the leg by plane. It would also have been illegal to carry it onto a train. Huang is now applying for the proper permit.

A sociologist surnamed Ye told Xinhua that China ought to move on from such superstition.