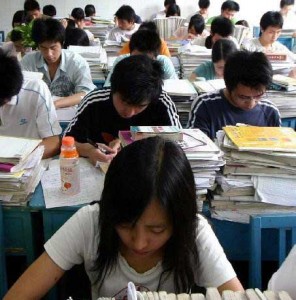 As the last holiday before the gaokao passed, Shenzhen residents shared their reflections and advice about the gaokao with The Nanfang. Despite Shenzhen’s reputation as a robust city in which people overcome obstacles to make their fortune, most respondents gave practical rather than inspirational advice to this year’s senior 3 students.

Wang Hui blamed her poor performance in the gaokao on the facts that she is still in her thirties, has never had the job she wanted, and has never studied abroad. She wishes she had been more single-minded when she was 18 years old, saying that getting into a reputable university is essential to getting a good job, and having a fulfilling career is “the only way to find meaning in life.”

Reintroduced after a ten year absence in 1977, only 230,000 out of 5.7 million candidates passed the gaokao that year. Currently, approximately 3 in 5 students pass, but this year’s students face renewed pressure after the Ministry of Education called for universities to focus less on increasing the quantity of graduates, and more on the quality of teaching. The number of candidates who sat the gaokao in 2010 was approximately 10 million, almost double the figure of 2002, so the percentage of candidates who get into university is likely to decline.

Vanessa, 28, encouraged students to be more rebellious and follow their own path. But she reiterated that getting into university was essential to having a healthy income in the future, and said her university years were the best of her life.

Other respondents expressed the popular view that China’s education system stifles creativity and enforces conformity. Xiaoxiao, 30, opined that Chinese people’s lives are “raped” by the gaokao. Others pointed to the example of author Han Han who did not take the exam and had a highly successful literary career.

Wu Xiaoyan, 25, was quick to point out positive aspects of the exam. “It prepares one for dealing with stress,” said Wu, reflecting that this is important in a city like Shenzhen. Other respondents added that dealing with forced conformity was necessary preparation for the adult world.

Parents Sleep On Gym Floor After Dropping Kids Off At University