Storm of the decade: Vicente worst storm to hit the PRD in 13 years 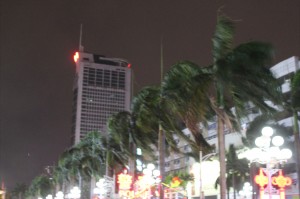 The worst storm to hit the Delta, classified as a Hurricane No. 10 by the Hong Kong Observatory, made its way through the western fringes of Guangdong Province after making landfall in Taishan early on Tuesday morning.

Just before 1am the Hong Kong Observatory hoisted its highest warning, a No. 10 Hurricane signal, something not seen since 1999, making it one of the most powerful typhoons to slam into the region in over a decade.

Throughout the night and into the early hours of Tuesday, storm signals were increased as the threat of flooding and landslides threatened neigbourhoods and highways.

By 7am, storm signals for Hong Kong and Macau were issued at No. 8 while red, orange and yellow warnings were in place on the mainland.

Check out the latest Nanfang Studio album with photos of Vicente hitting Shenzhen.