Government sources now say 18 people have died as a result of super typhoon Rammasun, reports the Guardian. Nine of the victims are from Hainan, with the rest reported in Guangxi.

Rammasun is the strongest typhoon to hit China in 41 years with wind speeds of over 200 kilometers per hour (124 miles per hour). Flights were grounded in Nanning, Guangxi, with some 1,300 passengers stranded. Nanning also suspended train service to other coastal cities.

In Hainan Province alone, some 3.2 million people were affected by the disaster, a number that represents 37.6% of the province’s entire population.

Rammasun killed 94 people in the Philippines, as well. Unfortunately, it doesn’t look like there will be any reprieve: a new typhoon named Matmo is currently gaining strength and threatens to cause more destruction along a similar path. Super typhoon Rammasun, the strongest typhoon to make landfall in mainland China since Typhoon Nora of 1973, has killed one person, caused the disappearance of four others, and has incurred an estimated RMB 2.8 billion in damages, reports Sina.

Ever since touching down in the province of Hainan Friday afternoon with wind speeds reaching 155 miles per hour, Rammasun has caused extensive damage throughout mainland China.

Rammasun has caused disasters in the cities of Zhanjiang, Maoming, 22 counties, and 171 villages. A total of 2.6 million people have been affected by the disaster. Damage to water facilities has been estimated at RMB 572.3 million.

Xuwen County, Zhanjiang in Guangdong Province was without electric power or any lines of communication for hours. Broken trees, downed electric poles and torn off signs are seen throughout the zone hit by the typhoon.

Two people are reported missing in Changjiang, and another two in the City of Wuzhishan. 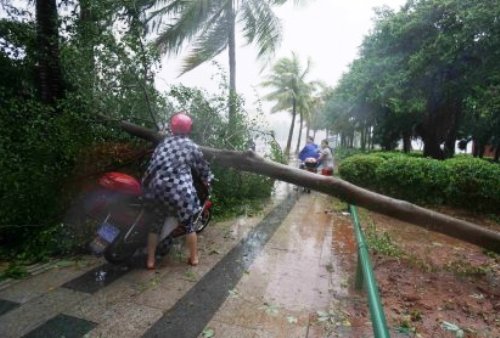 The Pearl River Delta is not expected to lie in the path of typhoon Rammasun, but will still be hit with strong winds and rain when it touches down to the west tomorrow, reports China Daily.

Rammasun is expected to make landfall on mainland China tomorrow afternoon in the area between Lingshui, Hainan to Yangjiang, Guangdong. Today at 2pm, Rammasun was located just 660 km away from Shenzhen. The typhoon is kicking up winds at 40 meters per second.

The Hong Kong Observatory issued a No. 1 Standby Signal today at 2:45pm. It said the intensity of rain and wind will continue to pick up for the Pearl River Delta. In coastal areas, winds are expected to reach category 6 or 7 (over 100 kilometers per hour) with gusts reaching up to category 8 or 9 (over 150 kilometers per hour).

Downpours are forecast for most parts of Guangdong Province from today until Saturday.

Day turned into night yesterday afternoon in southern Guangdong for one of this area’s famous thunder and lightning storms.

The storms left 17 people dead, according to this report from UPI:

The death toll from the weekend storm had risen to at least 17 with another 118 injured by Monday in the southern province’s Guangzhou, Foshan, Zhaoqing and Dongguan cities, flood control officials said.

Lashing rains were accompanied by gale force winds of more than 101 miles per hour and hailstones, the state-run news agency Xinhua reported.

Most of the victims were killed or injured by collapsing structures and flying objects, the report said.

Some cities were harder hit than others. But to get an idea how bad it was, take a look at this Youku video (h/t to @youkubuzz) shot in Guangzhou.