At 7:53pm on June 23, a red alert for torrential rain was announced for the city of Guangzhou by the Guangzhou Meteorological Center and broadcast on the official Weibo account for Guangzhou Traffic 106.1.

Affected areas include the Districts of Yuxiu, Liwan, and Haizhu.

The report advises city residents to stay indoors, or to get to a safe place as soon as possible. All programs for kindergartens, daycares, elementary and middle schools have been temporarily suspended.

Reports of flooding have already surfaced throughout the city.

Meanwhile, a yellow alert for lightning was announced at 9:20pm this evening for the City of Shenzhen.

Areas affected include the western side of the city as well as the Districts of Futian, Nanshan, Guangming, Longhua, Western Ocean, and Bantian.

The Guangzhou red alert warning was taken down at 10:22pm.

UPDATE 10:08am June 24: Corrected the proper time the red alert was issued, and when it was rescinded.

Seventeen people were injured when struck by lightning on Luofu Mountain in Huizhou on April 30, Nanfang Daily reports. The incident happened at around 2 p.m. when the party was descending the mountain at about 800 meters above sea level.

Seven of the injured have been discharged from hospital, nine are still in hospital in Changning Village and one has been transferred to Guangzhou eye hospital.

Thirty year-old Luo Bo, from Guangyuan in Sichuan Province, was leading the party of colleagues from the Foxconn factory in Longxi Village. During a thunderstorm, they took shelter under a rock when lightning struck.

Luo was the first to come round and he saw that his colleague, Gong Xinli, was the most seriously injured. He was lying prostrate on the ground and there was blood on his neck and coming out of his nose. Two of their female colleagues were unconscious.

They were taken to hospital and now none is in a critical condition.

In 2009, one was killed and four were injured during a lightning strike in Huizhou.

A freak accident happened in Shenzhen on Sunday night, according to a report in the Shenzhen Daily.

A woman and her two friends were hiking on Wutong Mountain when a thunder and lightning storm rolled through Shenzhen.  The mountain is home to a number of trees known as phoenix trees (Delonix regia) in China, which are tall and particularly susceptible to lightning strikes.

At one point in the evening, the woman was struck by a lightning bolt.  Her two friends nearby were also injured, and all three were rushed to hospital.  The woman was pronounced dead shortly thereafter.

Shenzhen reminds people again to be careful when out and about, especially during bad weather.  We are in storm season down here, so be mindful of weather changes. 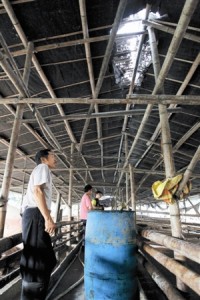 Fifty-three swine died instantly after their sty was struck by lightning in Shenzhen’s Guangming New Zone on July 5th, according to local media. The pigs ranged from 100 kilos to 150 kilos in weight, farmer Mrs. Chen told media.

Chen had recently turned down an offer for the pigs which she considered to be too low. “I don’t know how I will eat in the coming days,” said a tearful Chen.

According to her employer, Chen had bought the pigs with borrowed money, and every day would get up before dawn to feed and water them.

One Weibo user said that pigs are the most tragic of all animals. Another exclaimed, “when will 2012 stop seeing natural disasters?”
“ Day turned into night yesterday afternoon in southern Guangdong for one of this area’s famous thunder and lightning storms.

The storms left 17 people dead, according to this report from UPI:

The death toll from the weekend storm had risen to at least 17 with another 118 injured by Monday in the southern province’s Guangzhou, Foshan, Zhaoqing and Dongguan cities, flood control officials said.

Lashing rains were accompanied by gale force winds of more than 101 miles per hour and hailstones, the state-run news agency Xinhua reported.

Most of the victims were killed or injured by collapsing structures and flying objects, the report said.

Some cities were harder hit than others. But to get an idea how bad it was, take a look at this Youku video (h/t to @youkubuzz) shot in Guangzhou.