We told you yesterday that Dongguan’s crackdown on the sex trade might be costing the city RMB 50 billion ($8.25 billion). Now, it seems that the crackdown is also hitting the sex trade’s tertiary industries.

One insider with connections to the sex trade said at least 200,000 jobs would be affected by the government clampdown. This includes not only the obvious sex workers, intermediaries and “masseurs”, but also those industries that grow because of the trade: taxi drivers, hotel owners, restaurateurs and grocery owners, Hong Kong newspaper Ta Kung Pao reported on February 12.

At least 70% of the city’s taxi drivers are making a living from late night Johns, fresh from their “rendezvous,” Lao Wang, a local taxi driver, told the newspaper. A taxi driver can receive up to several hundred yuan in kickbacks by driving a John to a designated hotel or club. Now the midnight cab rides, and resulting kickbacks, are gone and drivers have to endure a long, slow night. “The night is almost through, I haven’t even had one customer,” one driver said.

Given the sensitive times, the cancellation of hotel reservations unsurprisingly spiked.

A Xiaoshang, a Dongguan street where throngs of xiaojie (a euphemism for a sex worker) used to congregate, is now an echoey shadow of itself. Grocery shop owners reminisce about the good old days when the xiaojies busily purchased products necessary for their trade.

Shenzhen feels the pinch of tough job market: one in four wants to quit

One in four Shenzheners wants to quit his or her current job and look for a new one, Chinese newspaper Southern Metropolitan News reported on February 11. But it is not going to be easy.

China’s employment situation is quite grim given that 2013 was described by the newspaper as the country’s “toughest employment season ever”. Almost seven million college graduates flooded into the country’s various job-hunting markets.

But the situation might be worse than what we had imagined, especially when Shenzhen, the country’s traditional boom town, is seeing 24.28% of its residents putting tiaocao, meaning job-hopping, on their New Year’s wish lists, according to a survey conducted by the newspaper.

The findings were echoed by a survey by Zhilian Zhaopin, a job search website. Zhilian’s results showed Shenzhen’s white-collar workers at among the least happy with their salaries.

Now that one has secured a year-end bonus (an important reason not to quit around the end of the year), job hunting in the city is in full swing, the newspaper said.

Dong Shasha is a case in point. A graduate from a Beijing college three years ago, Dong has changed jobs three times since graduation while working in the city’s advertising business.

Now she is hunting for another one, but is more cautious this time. As the job market gets tougher, a “naked resignation,” meaning quitting a job without another one lined up, is gradually losing its allure, the report said.

“I have been keeping an eye on various job posts since the end of last year. I am juggling between job interviews and my current job. A naked resignation is quite risky,” Dong said.

Yang Aogang, who received a job offer last year in the city’s telecommunication industry, is still weighing the pros and cons between his old job and the new one.

But compared with the 6.99-million graduates, who are probably still pounding the pavement for a job, Yang should be considered lucky.

Shenzhen in push to hire hundreds of new English teachers

A new government push to get native English teachers in 125 of Shenzhen’s public schools is good news for local expats, who will likely benefit from the increased employment opportunities as the plan continues to be phased in.

Shenzhen’s public schools are set to receive 175 new foreign teachers for the start of this academic year under the Center for Teaching and Learning in China (CTLC), according to a report by Shenzhen Daily on Wednesday.

A new five-year plan, released Monday, aims for all public schools in Nanshan District — and half of the city’s total public middle and primary schools — to offer English teaching from native speakers by 2018. The current crop of fresh recruits are TEFL-accredited and have two years teaching experience.

But it hasn’t been all good news for English teachers in Shenzhen this year. Many will remember that earlier this month The Nanfang picked up on a report that an unspecified number of undocumented English teachers were arrested in a crackdown in Nanshan District.

“At present, there are about 13,000 foreign residents living in Nanshan District, accounting for 42 percent of the expatriate population in the city. According to the Shenzhen Administration of Foreign Experts, about 11,000 foreigners with valid work permits were employed in Shenzhen last year, accounting for about 60 percent of the city’s foreign-worker population,” the Daily reported August 13.

Perhaps some of the English teachers arrested in Nanshan would have been better off working for such kinds of online startups. Because, as The Nanfang shared in a report yesterday, you don’t want to get on the wrong side of the law in China. 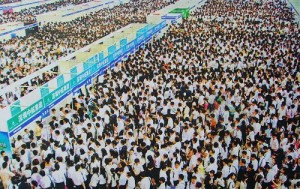