We don’t make this stuff up, honestly.

Despite having the 50 cm eel safely removed, the 39 year-old man is still in hospital.

The blogger who took to a local forum to expose the story, Wei Nai’an, claims to be a doctor. Netizens have been more disgusted by the man’s actions than the dubious ethics of telling a patient’s private story online.

In 2010, a man in Dongguan had to have an eel removed from his anus after carelessly sitting on a bucket of eels he was raising while having a shower. Or so he told reporters, anyway. 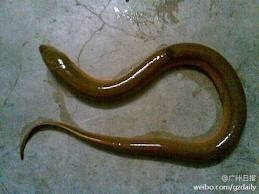 Those who were at Zhongshan’s Fuye Square got a nasty surprise Saturday afternoon when, for at least 20 minutes, a giant LED screen above the KFC in the square played footage from a Western pornographic film, Phoenix News reports.

Located in the west of the city, Fuye is one of the city’s busiest squares and is close to both a kindergarten and a primary school. Several passers by told Sohu News of their shock and disgust at seeing the footage shown so publicly in broad daylight.

Several pedestrians called the police. The following morning, the local public security bureau explained on its microblog that the unfortunate incident was caused by a worker’s computer error at the place where the screen is controlled.

One netizen said this was caused by Zhongshan’s dark history coming back to haunt it (Zhongshan is the hometown of former head of state Sun Yat Sen). Another said this was a great day in history. Another fancies that he’s seen this film before.