The crackdown in China’s undisputed capital of sex continues, despite recent reports that everything is returning back to normal.

That may come as good news to the 200,000 people who lost jobs as a result of the crackdown, which sent people fleeing from the city earlier this year. But while establishments are re-opening, they aren’t quite the same as they used to be.

Reports say that valid photo identification may be required for those late night massage visits, which we believe probably make up a majority of them, if a new proposal is approved. The proposal not only applies to Dongguan, but all of Guangdong Province.

From now on, any visits to a bath house after 2am would be subject to the new requirement. This will, more than likely, have a negative impact on these businesses. On the plus side? It’s sure to inject some stimulus into fake ID shops.

This new requirement has come to light alongside other stiff new regulations we told you about earlier, such as no lights off, no locks on the doors, and no prostitution (of course).

So where are these massage places? Far be it from us to tell you. Just remember, be safe.

Dongguan Gets Its Mojo Back as Entertainment Venues Reopen

Dongguan seems to have its mojo back.

Dongguan entertainment venues say they are ready for business following a crackdown on illegal establishments, reports Southcn. Apparently 80% of the venues are back in business as legal entities.

That said, Dongguan says it will continue to enforce the law. Managers of entertainment venues across the city were gathered yesterday and warned not to involve themselves in the prostitution trade. They all had to sign contracts promising to keep their businesses clean.

At present, there are 38 saunas, 465 KTVs, and 631 foot massage venues legally operating in Dongguan. Called the “3 entertainments” to occupy your spare time, the city of Dongguan has a total 1,134 such establishments.

Ever since a crackdown on the city’s sex trade was initiated in February after a CCTV News report exposed the extent of the problem, Dongguan authorities have cracked 281 sex trade cases, found 530 venues involved in prostitution, arrested 700 suspects, and disciplined 1,552 criminals.

A girl who works at a KTV bar in Dongguan’s Chang’an Town is in a vegetative state after necking a 700 ml bottle of foreign alcohol to win a 5,000 RMB bet with a customer, a court was told Tuesday (Nov. 12). The family is seeking a combined total of 450,000 RMB in compensation from both the customer who challenged her and the KTV at which the incident took place in March, Southern Metropolis Daily reports.

Xiao Mo, 26, started vomiting violently shortly after she had finished downing the liquor but she wasn’t taken to hospital until four hours later. She then descended into a vegetative state, and her family have appealed to the Social Security Administration to get help covering the medical fees. The Dongguan No. 2 People’s Court is yet to set a date for the trial.

Tang Shengli from Guangdong-based law firm Baowei told the paper that both Xiao Mo and the customer Mr. Liu were responsible for the accident. She should have been aware of the dangers of excessive alcohol consumption and known how much drink she was capable of taking, according to Tang.

Tang cast doubt on whether the KTV should be made to take responsibility because the victim was an adult and drinking with customers wasn’t part of her job description so it probably can’t be considered a workplace injury.

Is it time for China to learn that ganbei-ing is only suitable for baijiu? Are such tragedies the result of a culture of macho drinking? Is it a waste to simply neck foreign alcohol (which is expensive by definition)?

What do you think? 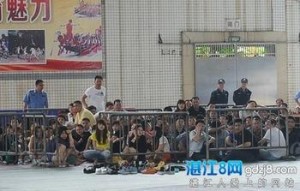 Those who were at Zhongshan’s Fuye Square got a nasty surprise Saturday afternoon when, for at least 20 minutes, a giant LED screen above the KFC in the square played footage from a Western pornographic film, Phoenix News reports.

Located in the west of the city, Fuye is one of the city’s busiest squares and is close to both a kindergarten and a primary school. Several passers by told Sohu News of their shock and disgust at seeing the footage shown so publicly in broad daylight.

Several pedestrians called the police. The following morning, the local public security bureau explained on its microblog that the unfortunate incident was caused by a worker’s computer error at the place where the screen is controlled.

One netizen said this was caused by Zhongshan’s dark history coming back to haunt it (Zhongshan is the hometown of former head of state Sun Yat Sen). Another said this was a great day in history. Another fancies that he’s seen this film before.

Movie on Dongguan’s notorious sex industry to be released

When one says they’re going on a trip to Dongguan, it’s often greeted with a wink-wink, nudge-nudge.  Such is the reputation of the city; while it has world-class golf courses and famous shopping markets, the PRD city has become synonymous with sex.

Reporter Vivienne Chow with the South China Morning Post has published a story (behind a paywall) on a new movie coming out called Due West, which is based on a book of the same name.  It documents Hong Kong men who seek sex on the Mainland, particularly Dongguan.

“Simon” serves as one of the extras in the film, and explains why men head north for sex, even when they’re married:

Interestingly enough, the men interviewed in Chow’s article seem to indicate they are seeking more than just sex.  They also blame Hong Kong women for their attitudes, which they claim are forcing them to go elsewhere for affection.

Despite all the hassles – and the risk of getting caught – some men cannot resist making the trip to Dongguan every now and then. “That’s because you don’t find this tenderness in reality… such as feeding you a piece of melon,” says 34-year-old “John”, another extra in Due West.

“You can never get that [from Hong Kong women]. Men are egoistic. We need to be respected, and these venues give us the respect that we need. It’s true that I pay for it. It’s a kind of service. It’s fake. But it’s worth it,” John says.

“Men are afraid of being controlled. Many Hong Kong women suffer from the ‘princess syndrome’. They want to tie their men down, but it never works,” Simon says.

Sex can cost anywhere from RMB300 to RMB1,100 depending on the girl, venue, and service provided, the article said.  Many are paraded out for men to select as though they were picking players for a middle-school flag football team.

Prostitution is rampant in China, but one wonders how Dongguan became one of the country’s sex capitals.  Its proximity to Hong Kong certainly doesn’t hurt, but Shenzhen is even closer (although it, too, has a large-scale sex industry).  Aside from what is on offer in Dongguan, it would be interesting to read how the industry developed to such a degree in the city.

No word on when the movie will be released. 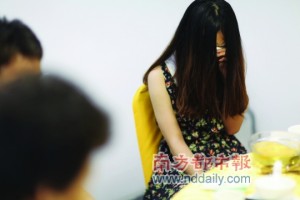 A high school student has told the Southern Metropolis Daily that she was raped by her teacher after being coerced into getting drunk at his birthday party three months ago.

Xiao Yu, 18, is a student at Shenzhen Global Digital Training School. On May 10, she and five classmates were invited by their teacher, Mr. Wei, to have dinner and go to KTV to celebrate his birthday.

While eating dinner and singing in the KTV room, the teacher encouraged his students to drink large amounts of beer and imported wine. Xiao Yu lost consciousness and was taken back to the teacher’s dormitory, where she was raped. The next morning Xiao Yu woke up naked next to her teacher, and according to Xiao, was raped again.

According to the report, most students in Wei’s class admire him and say he is a “model teacher”. Wei has been arrested but has told police that Xiao Yu, originally from Jiangxi Province, is his girlfriend. Therefore, he claims, he is not a rapist.