The Public Security Bureau of Guangdong announced at a July 30 news conference that they have seized over 25 tons of yogurt tablet candy containing melamine, reports QQ. The seizure was made at the Chaozhou Extensive Food Product Company, which is suspected of manufacturing and selling unsafe food items.

Police confiscated 12 tons of completed yogurt tablet candy, and 13.5 tons of candy that wasn’t yet ready for sale. All are suspected of containing melamine. The seizure may affect markets in 12 provinces throughout China.

The news conference held by the PSB was to highlight the authorities’ progress with a crackdown on fake food and drug products in China. It was the first time the crackdown on melamine-laced yogurt candy came to light, even though the seizure happened on February 11 of this year.

Recalls involving melamine are not rare. In the first half of 2014, the USA has made 339 unsafe claims against Chinese food exports in which over 13% are related to melamine or melamine-tainted foods.

Melamine first rose to prominence as a major Chinese food safety concern in 2008 when six infants died as a result of consuming melamine-tainted milk products. Melamine also came into the public spotlight in 2011 when 26 tons of milk powder contaminated with melamine was seized.

As part of the announcement, the Guangdong PSB stated that up until June 30, Guangdong police have cracked a total of 1,222 fake food cases, detained 1,823 suspects, and arrested 938 people.

Other raids resulting in confiscated unsafe foods include a bust on a fake alcohol production site in Dongguan. Two people have been arrested for producing five fake foreign brands that include Hennessy Paradis and Martell Cordon, with a total of 1,079 bottles confiscated. 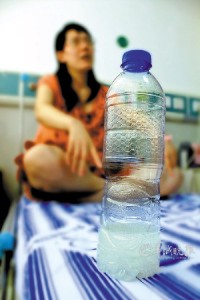 Papa John’s likes to claim “Better ingredients, better pizza” as a slogan, but perhaps the “better ingredients” part doesn’t extend to other food items sold at the American chain.

A woman in Guangzhou, Miss Jiang, was taken to hospital after drinking a cup of blueberry yogurt which had been mixed with disinfectant at a Papa Johns pizza restaurant in Guangzhou, according to the Yangcheng Evening News.

On the afternoon of August 26, Jiang was shopping with her friends in Xinxi Gang before they took a rest at the Papa John’s. She ordered a cup of blueberry yogurt.

After taking a sip, Jiang observed that it smelled like bleach. After tentatively taking another sip she asked the manager about the strange smell, and he admitted there was something wrong with the product.  ”They said there was disinfectant in it,” Jiang said. She was hospitalized for four days as a result of consuming the disinfectant.

“It was a strange misfortune. I have been in Guangzhou for 11 years and have never been seriously ill or injured. My throat is still in pain and I cannot eat or drink,” she said. Reporters went to the restaurant and saw the poisoned yogurt themselves.

Staff at Papa John’s said it would be hard to identify the culprit. “We have lots of part time workers, particularly students. It will be hard to catch the guilty party, but we will take responsibility for what happened,” the restaurant said in a statement.