After failing to win the affections of her love interest, Fu cut her wrists in a hotel room in Jiangmen, Guangdong at around 7:50pm on May 28. Fu posted pictures of her bloodied arm online as well as this text:

An unidentified friend in Fu’s WeChat social circle saw the posts and had the following conversation with her: 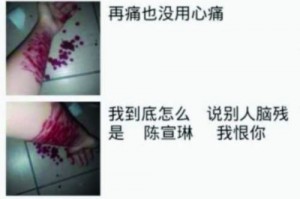 Friend: What are you up to?
Fu: Killing myself.
Friend: Sister, do you need me to call the police?
Fu: No need, I want to die.
Friend: Dying at such a young age is a tragedy. Where are you right now?
Fu: Haiyi Hotel, Room #505

The friend found Fu at the specified location and notified emergency services, who in turn were able to successfully rescue Fu.

Fu had used shards from a broken tea pot to make dozens of gashes into her left front forearm. Upon inspection, medical personnel say the cuts are not deep, and that the injuries are not life-threatening.

Police say that Fu had been using methamphetamine before the suicide attempt, but are unsure as to the source of the drug.

Photos: The Most Fashionable Man in China is a Henan Beggar