The purpose of aligning two foreign cities as sister cities is to promote cultural exchanges and share experiences that could hopefully help a city grow into a modern metropolis, or at least a more lively one in Sydney’s case.

The Mayor of Sydney, Clover Moore, visited Guangzhou with this purpose in mind in advance of the 30th anniversary of the two cities’ friendship in 2016. Amazed at the sight of dynamic dancing Moore saw at Huadu square in Guangzhou, the mayor vowed to import “auntie square dancing” back to Sydney, Guangzhou Daily reported on May 26.

Moore said square dancing in Guangzhou is a way to invigorate urban residents and their communities, adding that Sydney has the public space to accommodate dancing groups in its neighbourhoods. 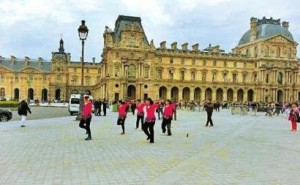 Moore’s comments seemed friendly, but perhaps her staff had failed to brief her on the problems brought by the increasing tension between dancing grannies and annoyed residents across China. Her comments quickly drew netizens’ attention with many flooding the comment section with the words “Do not regret.” The tension between dancing grannies and residents annoyed by their actions have become so intense that the magazine World of Chinese calls it “a national issue”.

Armed with rowdy music (often called shenqu 神曲 in Chinese) and portable sound systems, the country’s 100 million-strong middle aged and retired women have found themselves at a flashpoint of China’s urbanisation as the country grapples with increasingly crowded communities and their confined public space.

One Weibo user wrote: “Please take away all the 300 million dancing grannies to live their lives in Australia’s dancing plazas!” Another commented: “Please also take away the ones in Shanghai! Grant them technocrat immigrant status.” Still another warned that by the time that happens in Australia, Moore probably won’t be the mayor anymore. Mrs Xiong, one of the victims of excrement bombs. Photo credit:39yst.com

Fed up with the noise from the dancing, many residents across the country launched a slew of conventional and some extreme attacks towards the dancing groups such as making verbal insults and threats or hurling paint and smelly tofu. Sometimes, they may go to extremes—using excremement bombs of human feces and unleashing dogs.

One of the latest counter-attacks launched towards the grannies was from 600 residents in Wenzhou, who bought an RMB 260,000 “treble cannon” that emits a loud and ear-splitting sound to scare away the dancing groups who had been occupying the square from 6am to 10pm every day, CRI reported in March.

We fear that soon the dancing grannies will have occupied Sydney’s opera house, and then it will be too late.