Major Fire Breaks Out at Sinopec Facility in Gansu Province

A huge plume of smoke was seen from miles away in the capital of Gansu Province as a major fire broke out at a urban oil refinery this morning. The fire, at the Sinopec petrochemical facility in Lanzhou, broke at 8:39 am, according to CCTV News. So far there are no reports of any injuries or deaths.

The magnitude of the blaze is reflected in the city’s massive response to contain it. The city has dispatched 11 firefighting stations and one major firefighting team to the scene, encompassing a total of 33 vehicles and 193 firefighting personnel.

This Sinopec refinery is capable of distilling 300,000 tons of fuel a year.

UPDATE 12:53 pm August 4: This post has been updated with more photographs.

Woman falls from a 10th floor window after explosion, lands on passerby below

A gas explosion at a rented appartment killed a woman instantly in Yucui Village, Shenzhen’s Longhua District on the evening of July 30, Southern Metropolis Daily reports.

According to a neighbour, a blast could be heard at about 7:00 pm, then someone shouted “gas explosion!” The whole building shook. When the neighbour went outside, he saw the charred remains of a woman on the ground and also saw that the tenth-floor window from which she had fallen was smashed.

“She was a divorcee who had had a quarrel with her boyfriend. It is very possible that their frequent quarreling was what drove her to commit suicide,” said the neighbour.

Police said the woman was around 30, came from Hunan Province, and worked as a bus conductor. She ignited a gas canister at her home at 6:47 pm.  Police say her unhappy love life was the most likely reason for her suicide. A passer-by was hit by the falling woman and was taken to hospital but had no serious injuries.

One Weibo user asked what is about the modern age that is making people so fragile. Another said it isimpossible to know whether to blame society or to blame the person. Another suggested that this was all simply because women are stupid. 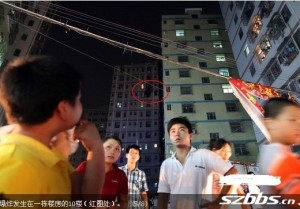