A new dual-currency transit card, which will work in Guangdong Province and Singapore, is set to launch in the first half of 2014 under the name “SINO Visitor Pass”.

In Guangdong, the service will be operated by Guangdong Lingnan Pass Company, and will be able to hold credit in both Renminbi and Singapore Dollars. This will be especially convenient to travellers such as businessmen that regularly pass through both regions.

“This means that in the future, visitors can also gain access to tourist attractions, food & beverage, retail deals and other lifestyle applications [at over 100,000 points] in both countries with this pass,” said CEO Nicholas Lee of EZ-Link in a statement. EZ-Link will provide the service in Singapore.

The card was unveiled at the fifth Singapore-Guangdong Collaboration Council (SGCC) in Guangzhou today. Its use may eventually be expanded to other areas of China.

Liu added: “Last year, we received 266,000 Guangdong tourists; this is about 15 per cent of total Chinese visitors to Singapore. In the same year, 12 Guangdong companies with a combined investment of US$240 million (S$306.4 million) set up presence here. We are pleased with these positive developments and hope to do more with Guangdong.”

Kaushal Parikh, based in Singapore, told The Nanfang today: “A survey revealed Singapore as the No.1 destination for Chinese tourists. So this will help boost trade and ties, and ease to tourists.”

The new card isn’t the only dual-currency card on the market.  Shenzhen Tong and Hong Kong’s Octopus have also teamed on a single transit card that can be used in both locations. It stores both RMB and Hong Kong dollars.

A businessman was found dead in the apartment of a foreigner in Guangzhou after he took 100,000 yuan in cash there to do business on April 20. The foreigner, a Caucasian male, is now missing, Southern Metropolis Daily reports.

When Mr. Mian, 32, was not answering his phone on the evening of April 19, several dozen of his friends were worried because one had seen him withdraw 100,000 RMB from an ATM on Xiaobei Road in Yuexiu District that morning.

Shortly after Mr. Mian withdrew the money at around 11 a.m., Hu Lin, his friend from his hometown of Ningxia, witnessed him agree to go to the apartment of a foreigner to talk business.

As late as 7:20 p.m., Mian answered his phone and told a friend that he was in an apartment complex in Zhujiang New Town. Twenty minutes later, Mian stopped answering his phone.

Concerned, his friends and family filed a police report. Although he hadn’t been missing for long, they knew he had a lot of cash on him so the situation could be serious.

The following day, Mian was found dead on the sofa of the foreigner’s apartment in Bolin International Apartment Complex. There was no blood, so evidence suggests he was suffocated by a pillow.

Security camera footage showed the two men enter together and the foreigner later leave alone at 12:40. The money was not found on Mr. Mian.

Police want to talk to the foreigner.

As Guangdong Province pilots the drive to make government officials declare their assets, one of the most high profile cases in the country of a well-connected person illegally acquiring properties is the ‘house sister’ scandal.

Now Shenzhen appears to have its own ‘house brother’ if the claims of the ex-wife of Mr. Liang, the manager of a State-owned telecommunications company, are true.

Liang, 36, has an income of just 20,000 yuan a month but has acquired 20 properties worth a total of 40 million yuan, according to Southern Metropolis Daily. In 2011, he married Luohu-based middle school teacher Ms. Wang after knowing her for eight months.

On December 6 last year, Liang filed for divorce in Luohu District due to irreconcilable differences. Wang demanded 500,000 yuan as part of the divorce, but the court ordered him to pay her just 93,000 yuan.

In reaction to the unsatisfactory settlement, a big red sign was put up on a street in Futian District Tuesday accusing Liang of illegally acquiring the wealth.

Wang claimed responsibility for the sign, and alleged that Liang acquired most of the wealth between 2004 and 2006 when regulations were mosre lax and houses were cheaper than they are now.

One smartcard to rule them all: Guangdong, HK team up to offer unified travel card 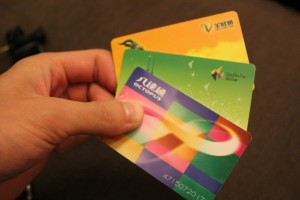 The days of filling your wallet unnecessarily with smartcards is about to end. Frequent public transport users around the Pearl River Delta will know how frustrating it is to carry multiple cards for our various well-connected public transport systems.

That is all about to change.

Starting July 18, Guangdong and Hong Kong are launching a new joint-smartcard eliminating the need for as many as four cards, uniting and simplifying the means of travel across the Delta.

The Nanfang told you last year how transport officials were set on a path to integrate Guangzhou’s Yang Cheng Tong card with Hong Kong’s Octopus and the Macau Pass card, and now it’s finally happening.

The new smartcard has been developed to hold separate RMB and HKD accounts for each area, so users can’t start using their HKD for mainland travel nor the other way around.  It will initially be available for use in Guangzhou and Hong Kong.

Users will be able to swipe for buses, taxis, ferries and metro services, and of course be able to purchase all manner of sundries in Hong Kong using the card.

The new card will cost RMB 80 or HKD 98 but users will still have to top up their card as it will come with no initial credit. No word, yet, on whether holders of individual smartcards will be able to transfer their balance over to the new card.

Life of Guangzhou has an interesting comment from a provincial official who provides more detail on the joint-card scheme:

According to Liu Xiaohua, deputy director of Guangdong Communications Department, as the LNT card will be accessible in cities like Shenzhen and Dongguan at the end of the year, the new card can be used throughout the province and Hong Kong, and even in Macau in 2013.

For those eager to get their hands on the new card sooner, a run of 3,000 limited edition cards will be available from July 2 for RMB 238 or HKD 298.