UPDATE 2:35pm June 15: There have been train delays and suspensions of service in Guangdong due to the storm, reports the People’s Daily.

As of now, service on train G6309 has been suspended from Guangzhou South Station to Chaoshan. Train service on the Xiamen-Shenzhen Railway is limited to only 80 km an hour from Huizhou Station in Zhan’an District. Other trains have been reported late.

A code white typhoon warning is in effect as tropical storm Hagibis is expected to make landfall with mainland China later today, reports CCTV. In Hong Kong, typhoon signal number one has been hoisted.

Hagibis is estimated to land in the coastal region between Shantou, Guangdong and Xiamen, Fujian later this afternoon or evening. The four cities expected to be hit the hardest include Shantou, Shanwei, Chaozhou and Jieyang.

At 7am today Hagibis was located 280 km southeast of Shenzhen, moving in a northerly direction. It was recorded yesterday moving at a rate of five to 10 kilometers per hour, and is expected increase its rate of speed to 15 km/h upon making landfall.

Guangdong will have precipitation today with some areas like Shenzhen experiencing torrential rains. Coastal regions will experience wind rated at category eight or nine and gusts up to category 10.

Waves are expected to be very high. At 8am, the Guangdong Emergency Response Center initiated a level 3 alert, mandating the return of all sea-going vessels.

There is one positive outcome of the arriving storm: Shenzhen can expect cooler temperatures of approximately 26 degrees Celsius later today as well.

UPDATE 2: 4:22pm, May 2014. A post from the Shenzhen police Weibo tells us the areas facing the highest risk from the storm are the districts of Bao’an, Longgang, Longhua, Guangming New Town, Pingshan New Town, and Dapeng New Town. Police tells everyone to be vigilant and exert caution 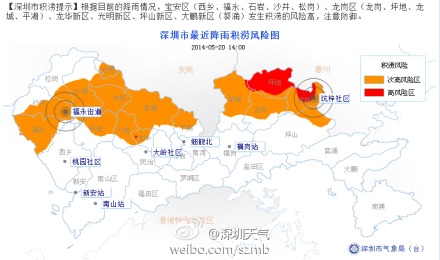 UPDATE 1: 3:06pm, May 20, 2014. Shenzhen has just issued a red alert weather warning. As a result, protocol states that middle and elementary schools are now closed, workers are discouraged from going to work, and delays are to be expected for public transportation.

As Dongguan issued a rain alert earlier today and the forecast calls for precipitation to last until Friday, the mounting costs of a this past week’s torrential rain is estimated at RMB 205 million and at least two fatalities.

The Guangdong Provincial Ministry of Civil Affairs has reported the storm and flooding is responsible for two deaths and one missing person. The victims include an eight-month pregnant woman who was washed away in a landslide when it destroyed her home in Pingshan New District, Shenzhen.

The Ministry of Civil Affairs reports the rain has affected a large area of Guangdong since it began on May 15 including the six cities of Shenzhen, Shaoguan, Meizhou, Shanwei, Qingyuan, and Yunfu. Twelve counties and 52 villages have also been hit by flooding of varying degrees.

Meanwhile, Guangzhou was hit hard with rain on Sunday before noon when 50mm fell within an hour. An accumulation of 400mm was recorded in Tianhe District and caused a 3km-long traffic jam.

The rain in Huizhou has affected some 10,000 residents and is said to have caused eight landslides. 428mm of precipitation was recorded in the 24 hour period before 6am on May 18.

A weather forecast for Guangzhou says that rain will continue everyday this week until Friday, but that lightning will cease after today. 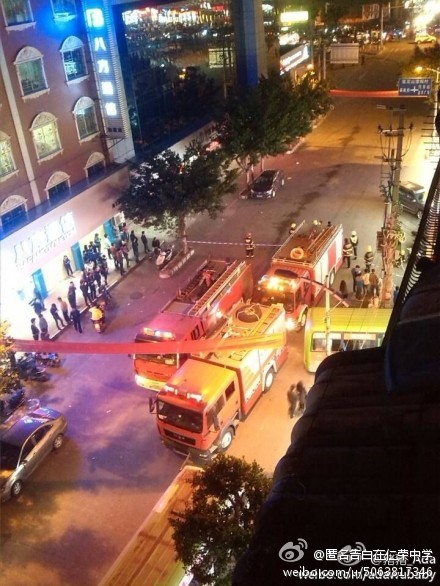 Typhoon Usagi, the most powerful storm of the year, has killed at least 25 people in Guangdong, BBC News reports.

A beach in Shenzhen as the typhoon made landfall, image courtesy of BBC News. All beaches in the province were closed.

The Pearl River Delta was also badly affected. Hundreds of flights were cancelled from Guangzhou and Shenzhen as well as many train services.

Lessons were cancelled at local schools ahead of the typhoon, but they will resume tomorrow, according to Guangzhou Daily.

Child trafficking ring busted, 14 of the rescued babies were sold by their own parents

After four child trafficking rings were smashed in a cooperative effort by police in six Guangdong cities on October 17 last year, it was discovered Monday that 14 of the rescued babies had been sold by their own parents, according to Sina News. Another baby died while being transported by the criminals.

The parents received between 20,000 and 30,000 yuan for the children. Three of the childrens’ parents have already been arrested and all 13 of the infants now reside in orphanages in Huizhou. Another was adopted.

In May last year, police in Huizhou, Meizhou, Heyuan, Dongguan, Jiangmen and Shanwei began to cooperate after three babies were rescued and three trafficers were arrested in Heyuan.

The effort culminated on October 16 when 27 were arrested and the rest of the babies were rescued.

Police are now seeking out the rest of the parents and the orphanages are trying to find homes for the children.

In a country that prides itself on its family values, netizens are outraged that any parent could consider this. One Sina Weibo user said: “If you can’t afford a baby then don’t have one.” Another wished for all the parents to get the death penalty. 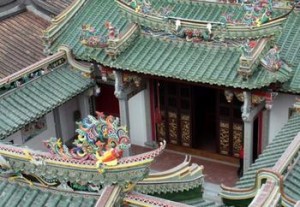 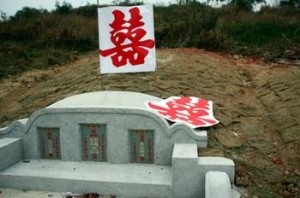 Maybe the air will improve? Shenzhen to move factories

Good news for Shenzhen, maybe not so much for people in other towns in Guangdong.

China has announced that it will begin cleaning up the air in Shenzhen (and Beijing, which badly needs it) by moving 10,000 factories over the next five years.  The announcement came at the start of a climate change conference in South Africa.

The Times of India has a few more details:

The shutdown will give the local government 7.5 million square meters of land to develop into high-end industry, state run Xinhua quoted Science, Industry, Trade and Information Technology Commission as saying.

Shenzhen mayor Xu Qin said 4,000 factories will be transferred to an industrial park in the neighbouring city of Shanwei and 5,500 will be shifted to other cities in Guangdong province.

Even though “closing” factories or improving their efficiency would be better than simply “moving” them, it’s a good first step to clearing the air in what should be one of China’s prettiest southern cities.