The man, aged around 30, had climbed the barrier on the seventh floor and was perched on the precipice, starting a stand-off involving passers-by and security staff. After chatting with security staff, he smoked a couple of cigarettes and was talked off the ledge, according at an eyewitness named Mr. Tang. 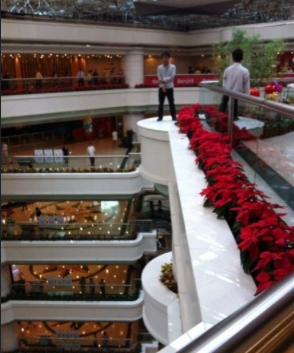 The stand-off, image via TVS.

However, he then jumped at around 3:40 p.m. and was confirmed dead by paramedics. 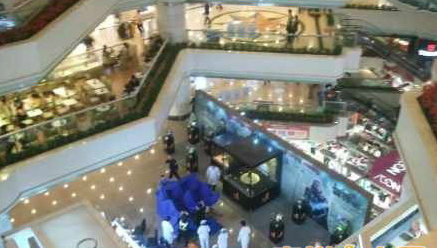 Paramedics at the scene, via Sina Weibo

A Zhongshan man was arrested yesterday after spending 13 hours poised on Guangzhou’s Liede Bridge in a suicide stand-off, Xinkuaibao reports. He set the record for the longest stand-off of this kind even though the bridge’s suspension cables were wrapped in barb wire earlier this year to prevent suicidal people from climbing it.

Mr. Su, 40, admitted his behaviour was wrong after police, firefighters, paramedics, and even a representative of the Zhongshan government were called in to talk him down from the bridge while he was up there between 6:48 a.m. and 7:48 p.m.

Su claimed to have lost a lot of money in 2007 after investing in a tree planting project in Shunde and was no longer able to feed his family or serve the people.

When police finally guided him down he was in good physical condition despite not having eaten all day.

He is under arrest for disturbing public order.