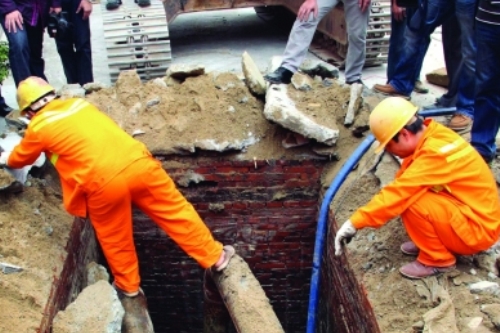 You wouldn’t charge money from a river for flowing, would you? Now, what if the river was flowing through your house? And you changed the direction of the river to do that? Is it so wrong to stand fast in the stream as the current washes over you?

Pirates in the village of Dadun, Zengcheng District have been stealing water for 10 years by tapping into the village’s water main, Nandu reports. And this isn’t just a small drop in the bucket — water worth 10 million yuan has been reportedly stolen in a case that implicates half of the village, police say.

When repairing a water main that broke on January 5, workers found five unauthorized pipes that were tapped into the city water source, prompting an undercover police investigation.

It was discovered that Mr Lu, a village committee member in charge of waterworks, and five other people had organized the act of piracy. They blocked off the main gate to the Residential Security Committee building in order to conceal themselves and dig access to the water main.

After getting arrested on March 28, the group admitted they have made similar jobs at two other locations in the village. Besides used by several laundry-washing factories, the water was offered to village residents at rates comparable to those of the water company.

Water Supply Compromised in Guangzhou Due to Ruptured Pipe 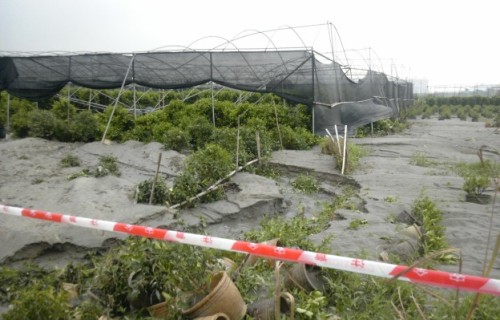 When it rains, it pours; but with water, water flowing everywhere at the site of a broken water main, some Guangzhou residents are finding that they don’t have a drop to drink.

Early this morning, a water main ruptured in the vicinity of Panyu and has caused a disruption of service at the South Guangzhou Water Plant and resulted in the loss of 500,000 tons of fresh water, reported Guangzhou Daily.

The ruptured main has compromised service to the southern part of the city including areas of University Town, Tianhe District and Yuexiu District. A rough estimation of areas affected would include areas of Guangzhou going north up to Huangpu Boulevard, west over to Liberation Middle Road, and east over to Huanan Expressway.

As for how bad the situation has gotten, some residents of University Town had already complained of a lack of water this morning while it is currently reported that water pressure has now dropped 30% for residents in Haizhu District. Residents in apartments above five floors now must employ water pumps to draw water up for use.

While other water plants are currently trying to divert a supply over to the affected areas, repairs are estimated to require 1-2 days to complete.

Meanwhile in the “It Can Get Worse, You Know” category, the water supply in Lanzhou has recently be found to contain benzene, causing city residents to panic purchase all of the city’s remaining bottled water.

If you woke up to find your tap water spewing out leeches, dead eels, baby frogs and other colourful insects, you would almost certainly be suing whatever company supplies your drinking water. Here in the 2,000-member Liangtian village in Guangdong, the local water company gave up water purification and disinfection a long time ago, and the local government hasn’t bothered to do anything about it.

The quality of the tap water in the village is so bad that the total bacteria count found in the water is tested at 2,200 colony forming unit per litre (CFU/L), 22 times higher than the maximum level of 100 CFU/L allowed in tap water, Nanfang Agriculture Daily reported on March 26. CFU is an estimate of viable bacterial or fungal numbers. In addition, the water also contains higher density of coliform bacteria and higher levels of iron, the report said.

To put the severity of the unhealthy water in perspective, villagers are not even using the water for showers, let alone drinking. Below is a photo of one of the water sources leading to the village: 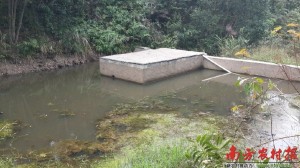 It’s hard to imagine this is the result of the village’s water improvement project last year, which attracted a total of RMB 700,000 (about $113,000) in investment. When villagers confronted their local government about the heinous water quality, the government brushed it off and said they only supervised the construction and had nothing to do with the water quality.

To make the government’s none-of-my-business attitude clearer, the head from the Water Department in Huangtian Town, which manages Liangtian village, said of all the 17 villages under administration by the town, only six have safe drinking water; the other 11 are all left on their own. He said a bigger village in the town, with a population of 3,000, still gets by without water disinfection, as if to dismiss the case.

Then what should the villagers do? Hold their nose and filter out the insects when drinking? Maybe the policy in town should be: Don’t ask. Don’t Smell. Just drink with your eyes closed!

Guangdong’s Dong River is cleaner than ever, but beware of jellyfish

Once regarded as one of the most polluted rivers in the world, the Dong River (also called Dongjiang), which flows through Guangdong and provides most of the drinking water in Hong Kong, is now significantly cleaner than it was 10 years ago.

“A water improvement project that was commissioned by Hong Kong and provincial governments in 2003,” is apparently to thank, according to a report by the South China Morning Post last week.

However, one of the interesting side effects of a cleaner Dong River has been an increase in freshwater peach blossom jellyfish. So, if you’re feeling like going for a dip in the nice clean water, perhaps you ought to think again.

Does that mean you’re better off swimming in China’s dirty rivers? No, that would just be madness. Asides from all the toxins and pollutants (and probably sewage) in unclean, smelly rivers, there may well be jellyfish floating around in there too.

Bloomberg reported over the weekend that jellyfish can tolerate warm and polluted rivers:

“If anyone is to blame for recent destructive jellyfish “blooms,” as their regional population explosions are called, it is not them, but us. That’s because jellyfish can tolerate waters that are warm and polluted — conditions that human activity promotes. And as people have fished predators and competitors from their midst, jellyfish reign.”

What does the message seem to be? You’re better of just staying out of China’s rivers altogether.

Police in Guangdong tackling the problem of “driving while tired”

The summer holiday is the time during which the majority of accidents caused by driving while tired occur. For this reason, traffic police in Guangdong Province have launched a campaign to spread awareness of the issue.  It will run from July 8 to August 31.

Unlike drink driving, it is difficult to crackdown on this particular traffic violation because there is no easy way to prove somebody is been guilty of it. On this particular drive, the police activity has been limited to handing out leaflets, cards and symbolic gifts such as water and green tea to discourage people.

As of Jan. 1 this year, the province will punish those who drive for four hours without resting for at least 20 minutes, with a six-point penalty and 200 yuan fine. The punishment is increased to 12 points and a 200 yuan fine for those who do so while driving a bus, coach or lorry.

However, since this drive was launched four days ago, nobody has been caught in the act.

Shenzhen to have safe tap water later this year

Last Tuesday, Shenzhen’s Water Affairs Bureau announced that residents of the city can expect to have safe and clean drinking water pouring from their taps as early as the second half of 2012.

Part of this is the result of 18.1 bln RMB invested throughout the current Five Year Plan, writes the Southern Daily newspaper, raising Shenzhen’s wastewater treatment ratio from 36% to upwards of 91%, but also in part due to new water sources. Shenzhen’s current main source of drinking water, East River, is also the single largest source of raw water supply for Hong Kong.

Shenzhen also announced that it has raised its wastewater reuse ratio from 1% to 27.1%. The city is slated to undergo a water quality inspection in July to evaluate how its drinking water holds up against provincial and national water quality standards.

Interestingly, the Southern Daily story seems to imply that Shenzhen was only able to achieve this somewhat miraculous feat after privatizing its water treatment facilities.