Almost two weeks after a man was caught answering nature’s call at Laojie MTR station in Shenzhen, another man riding on the Shenzhen Metro was filmed relieving himself inside a Line 5 subway carriage around midnight on May 27. 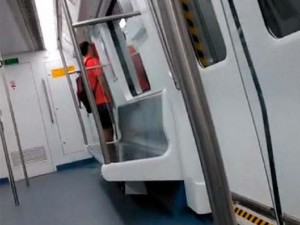 The man in red relieves himself inside a metro carriage

The 13-second video uploaded to Youku (now encrypted) was filmed by Mr Fan, a teacher at Shenzhen Tsinghua Middle School, who unfortunately witnessed the entire scene. Around 11pm, a man that appeared to be drunk and wearing a red T-shirt, a pair of black pants and a backpack, teetered and waddled to the last carriage of the train. To Mr Fan’s surprise, the guy did not find a seat and sit down in the empty carriage. Instead, he was seen standing close to the carriage’s door and going through the rituals that all guys are familiar with when nature calls.

This is however, not the first time ill-mannered commuters have been seen peeing or pooping on a metro station. In 2013, a high school student was seen sitting with his pants off on top of a trash can and pooping in the Guangzhou Metro.

Guangzhou recently introduced a bathroom-locator app for passengers who need to use public toilets. Perhaps, Shenzhen should consider introducing one too, the sooner the better. No one wants to read the next tragic headline: Man’s private parts caught by the metro door while peeing.

Watch: Pregnant Woman Passes Out In Front of Beijing Train, Crawls Out Alive