What’s your favourite quote about meetings?

Is it economist John Kenneth Galbraith’s “Meetings are indispensible when you don’t want to accomplish anything”? Or is it author Thomas Sowell’s “People who enjoy meetings should not be in charge of anything”?

Photographs were leaked on January 15 showing officials at the Shenzhen Municipal People’s Congress sleeping and playing on their mobile phones, Shanghaiist reported.

The agenda at the meeting included pressing issues such as air pollution, food safety, and education. But the attendees in the photographs were not interested enough to pay attention.

Maybe they don’t care. It may be that meetings have a way of making the most interesting subjects boring. But they did not pick a good time to be photographed neglecting their duties. 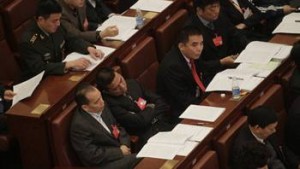 It’s at this time of year that Chinese society’s unfairness and inequality become particularly evident.

While people with money and connections are able to afford to visit their families at Spring Festival, migrant workers struggle to afford the tickets for public transport and hotel rooms that see their prices hiked for the season. This issue caused controversy in Foshan last week.

Netizens have reacted angrily to the images of officials slacking on their jobs as they are among society’s most privileged people. There are over 100,000 comments under the original news story.

Look at all the bowed heads

Other comments included: “This just goes to show that even they don’t believe a word they say”; “Reforms should be introduced to prevent these dogs from representing anybody”; and “They really are representative of the people they govern.”

That last comment shows that these photographs are less sensational than they would have been if the same thing happened in, say, America. In China, many people start sleeping at inappropriate times early in life. It is common and sometimes even expected for students to sleep in class.

Shenzhen Man Crushes Baby After Rolling Onto Him While Sleeping