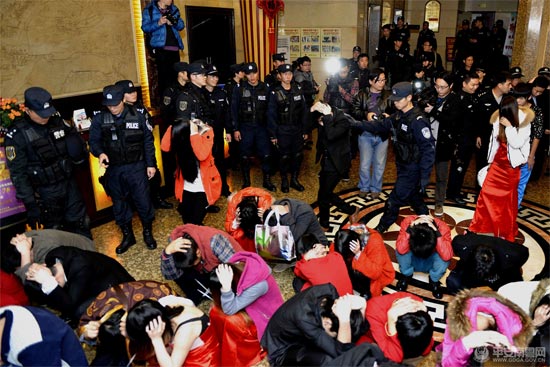 Male prostitutes in Zhuhai who used the Internet to solicit clients are some of the more than 3,000 people arrested for prostitution-related crimes in the province.

Zhuhai police first discovered the ring in March when an online group named the “Zhuhai Cool Boys Club” caught their attention. Operating via an overseas Internet server, the club poses as a massage service provider, but under the table it was busy setting up its male sex workers with clients.

After a month-long investigation, police discovered the club was using a bar called Mongkok Pub in Gongbei Xiawan District as a meeting place between male prostitutes and their patrons, China News reported on June 12.

The police raided the bar on May 9, arresting the owners surnamed Wu and Zhang. Six prostitutes were also apprehended at nearby hotels.

Ever since a CCTV reporter went undercover to expose Dongguan’s rampant sex trade in early February, Guangdong has carried out a zealous campaign to clamp down on prostitution. 3,553 establishments in the province were deemed illegal and 1,200 websites related to prostitution have been shut down.