Guangzhou police are stepping up patrols in the city following the July 15 bus fire that killed two and injured 32, reports Southcn. More than 11,000 Guangzhou police officers will be mobilized to try and keep the city safe.

Described as “unprecedented”, commuters entering Guangzhou train stations and bus stations will be required to undergo mandatory security checks that are like going through customs at an airport.

In addition to an increased police presence, Guangzhou will be utilizing its security network of 397,000 surveillance cameras for 24-hour surveillance. 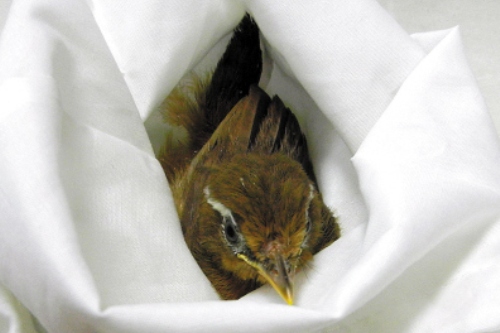 Never underestimate the extent a pet owner will go to shield his beloved pet from Guangzhou’s air pollution.

A foreigner was at the security check before boarding a plane to Singapore when security guards noticed the cuffs of his trouser legs were suspiciously bloated. A search revealed two hidden birds wrapped in white cloth, Yangcheng Evening News reported.

When asked the motive behind the smuggling operation, the foreigner said he was planning to take his birds to Singapore due to Guangzhou’s bad air quality. Unfortunately, the airline he chose does not allow live animals on board, and the poor guy now has to get one of his friends to send the birds to Singapore for him, hopefully with less hassle.

For now, his two little birds have to endure more of Guangzhou’s bad air.

UPDATE: 6:38pm June 6: The foreigner suspected of smuggling in this story has been identified as 43 year-old Naum Pokrovsky, reports the Moscow Times.

From the annals of GZ airport security quirkiness: the turtle hamburger

Renowned China-watcher and keen aviator James Fallows has argued that China’s airport security is at a sensible level compared to the overzealous security in the United States.

This has given rise to some passengers in China trying their luck with some truly bizarre objects, and most of these incidents seem to happen at Guangzhou Baiyun Airport. The latest of these is a live turtle being smuggled inside a KFC hamburger by a Beijing man at the airport.

UPI has the story:

The man, whose last name is Li, was on his way to board a China Southern Airlines flight to Beijing when he was stopped during the x-ray screening at the airport over an “odd protrusion” that was sticking out of a KFC burger inside his bag.

Airport security soon determined the bump looked an awful lot like a turtle and decided to inspect Li’s bag.

“There’s no turtle in there, just a hamburger,” the man allegedly told authorities. “There’s nothing special to see inside.”

Once airport officials found the turtle and confronted Li, he explained that he just wanted to travel with his “beloved” turtle.

After airport authorities told the man he was not allowed to smuggle animals into planes he reportedly decided to leave his turtle with a friend while he traveled.

And this is probably not the most bizarre.

In March, a foreign woman was told she could not carry a bottle of liquid on board, so she swigged it but did not swallow. When asked to spit the liquid out, it emerged that she had been trying to smuggle tadpoles on board.

In February, a disabled man was prevented from carrying his severed leg in his luggage, and last December a woman was forbidden from wearing “anti-pervert” spiky shoes onboard.

A foreign woman was stopped at Guangzhou Airport’s security on March 16 for having a bottle of liquid in her luggage.

As everybody knows (or should know), you can’t pass through security with any liquid. So she was asked to drink the liquid, and did. However, she appeared not to swallow. When the security staff asked her to spit out the liquid, it emerged that she was trying to sneak some tadpoles onto the plane, Southern Metropolis Daily reports.

After being caught at around 9 a.m.,

the foreign woman explained to staff that the tadpoles were a gift from a Chinese friend and she didn’t want to get rid of them. But in the end she had to.

The airport stressed that passengers are forbidden from taking animals onto a plane without registering them first.

It definitely isn’t the weirdest thing people in Guangzhou have put into their mouths, but at least it wasn’t as obvious as taking a human leg through airport security.