Airline passengers could be allowed to use their mobile phones throughout the entire flight when travelling on Chinese airlines, Beijing Times reported on September 29. The new functionality is expected to be rolled out in 2016.

The report came on heels of a decision by the European Aviation Safety Agency (EASA) to lift a ban that prohibits passengers from using mobile phones during flights.

Passengers travelling with Chinese airlines are currently required to keep their mobile phones off for the entire flight to stop the devices from emitting radio signals that could, at least theoretically, interfere with the aircraft’s navigation system. This means even airplane mode is not allowed, although many countries in Europe and the Americas permit their travellers to put devices in airplane mode during flights.

The new rule, if passed would allow travellers to use their phones in airplane mode when flying at or above 3,000 meters. Zhou Hong, an aviation expert, said the new bill will likely pass.

The loosening on phone use during flights could also pave the way for onboard WiFi services in the country, the report said. Air China, China Eastern Airlines and China Southern Airlines are testing inflight WiFi systems and phone calls. The country’s telecommunication companies are also working with Chinese airlines to study the possibility of making phone calls during flights, said He Guili, director of Tai’er Lab under the Ministry of Information and Industry Technology. 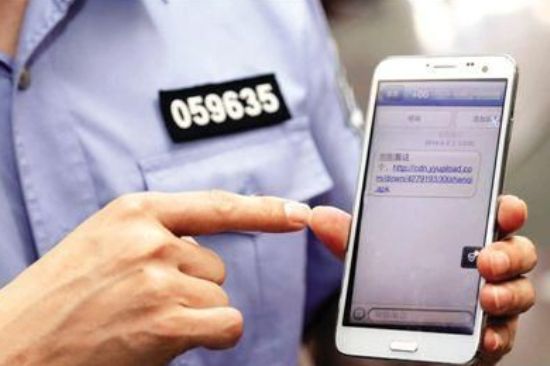 The man behind the latest cyber-scare threatening China’s mobile phone users has finally been nabbed by police. A 19-year old student behind the virus known as “shenqi.apk” that afflicted Android mobile phones was on summer vacation in Shenzhen when he was arrested, reports iFeng.

The virus is able to read a person’s contacts file and determine the owner’s identity. Worse, it can send messages from the phone, including the virus itself to people in the contacts list.

The suspect, named Li, is from Xinshao, Hunan Province. He is a student of computer science at Zhongnan University and has no previous criminal record. He happened to be in Shenzhen over the summer to help his dad, who works at a local company.

Because Li was curious, he made a virus for cell phones that could be disseminated over a large-scale area throughout the country. Li completed the trojan horse virus on July 24 and then used his own phone to send it. 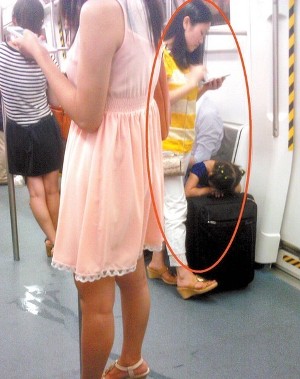 The trail of pee is visible in the photo.

Every few minutes, the hum of Hong Kong’s MTR trains is punctuated by a monotone female voice that announces, “Dear passengers, please hold the handrail. Do not keep your eyes only on your mobile phones.”

We don’t know if there are similar announcements made on the Shenzhen Metro, but parents who are so fixated on their phones that they refuse to take their kids to the toilet deserve a similar announcement: “Irresponsible parents, please keep your eyes on your kids, not your mobile phones.”

We don’t know what the woman was doing on her phone at the time, but whatever it was, it was compelling enough to ignore her child’s plea for a toilet. And as any parent can attest, it often requires the discipline of a Zen Buddhist to ignore a whimpering child.

On June 17 on Shenzhen Metro Line 5, a little girl was seen crying on the train, asking her mother to take her to the toilet. After two stops of receiving the silent treatment, the little girl could no longer hold it, squatted, and proceeded to do what comes naturally.

The trail of pee flowed as long as three to four meters according to a witness who posted the images online, Yang Cheng Evening News reported. After relieving herself, the little girl was dragged back to her seat by her mother. The daughter was seen sobbing on a suitcase while her mother continued to stare at her phone as if nothing happened.

According to the report, each subway stop on Line 5 has a toilet, but it did not matter to this mother or the two other guys who were seen peeing inside the metro earlier this May: one at Laojie station, and one inside a moving subway.

As usual, Weibo users were quick to speculate as to what happened: “She is not the little girl’s biological mother.” Another user Waymend added: “Her phone must be her biological child.”

It seems that for the expressed purpose of ignoring your child, there is in fact an app for that.

This Is What Using The Internet In China Is Like

This picture is a very simple: Changsha traffic police are pushing a public transport bus in the middle of traffic.

And yet, there’s so much more to this picture, perhaps even as a metaphor for using the internet in China. Consider, if you will:

While pictures are worth a thousand words, to write anything else would just be snark.

The prices of mobile phones are going down faster than a beer at a frat house, and that is causing problems for some of China’s “no name” brand phones. Huaqiangbei is famous for being ground zero for mobile phones in Shenzhen, but declining prices on legitimate brands such as Nokia and Samsung are putting the squeeze on manufacturers. The Shenzhen Daily reports there are 3,000 manufacturers of knock-off (more commonly known as shanzhai) mobile phones in the Huaqiangbei area, and sales are down 12% already this year.

Phone buyers now have higher requirements in looking for mobile phones, and more buyers are buying branded phones plus around 300 new brands of registered mobile phones are released in the market since last year. For a unbranded mobile phone maker to release a new model the need to invest around one million yuan. Investing in making new mobile phones will help maintain their market share of unbranded phones but with a risk of bankruptcy if it doesn’t sell well.

This risk have forced companies to go out of business, and many said the knockoff mobile phone industry should undergo restructuring. With newer and intense market competition will surely out phase manufacturers, while those with a strong research and development ability will stay a little longer.

In nearby Hong Kong, some Nokia-branded phones are being given away with the purchase of other electronic items, underscoring how far their value has plummeted in recent years.

As bleak as the picture seems for knock-off mobile phone makers, Huaqiangbei, at last check, still had a vast selection of devices. So no need to panic…. yet.