A Lamborghini sports car worth over $441,000 was wrecked in a collision last night in Shenzhen with alcohol suspected to be a factor, reported the Shenzhen Traffic Police.

Early this morning at around 12:52 am, a driver named Ma crashed a red Lamborghini Aventador Ip 700 into the rear of a Mercedes-Benz. Ma was driving on Futian South Road and was turning onto Binhe Boulevard when he lost control of his vehicle. Ma is said to have drinking at a bar before the collision and was driving fast. There were, amazingly, no reported injuries.

The temporary license plate of the Lamborghini has been discovered to be a fake. 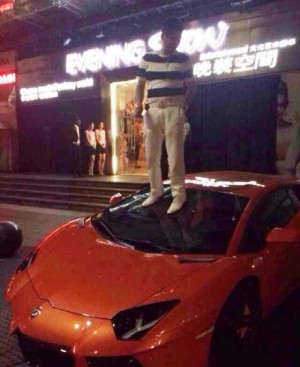 Breaking news: the driver of a blue Maserati caused multiple injuries and damages to several cars in Guangzhou yesterday when she lost control of her vehicle, reports iFeng.

At approximately 2.50pm on May 4, a blue Maserati was seen speeding through a parking stand in Xieshan Village, Tonghe Township. The car then proceeded through a memorial arch where it collided with three pedestrians and four cars before finally coming to a stop.

One eyewitness to the scene described the car as travelling very fast. “Once it turned the corner, it just flew in here!” Of the three victims, only a Mr Rong sustained serious injuries to both of this legs; the other two victims escaped with light injuries.

A spokesperson for an insurance company revealed the crash happened because the driver, a woman in her 40′s, had confused the accelerator for the brake pedal. The spokesperson also stated that the car was a new purchase and was only a few days old.

Maseratis are priced at several million yuan in China, and the value of these luxury vehicles usually means that they are allowed to park anywhere at all.

Traffic Jam for One: Mercedes-Benz Trapped By Wet Cement in Guangdong 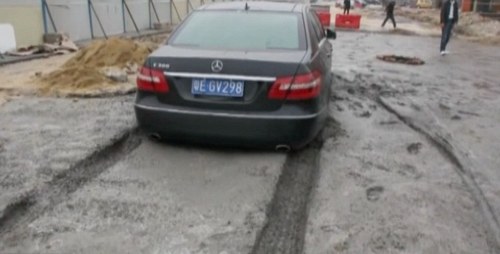 The harbingers of international diplomacy at the Daily Mail have given us their most recent exhibit yet: video of a Mercedes-Benz trapped in dried concrete after its driver attempted to pass through a street under construction in Guangdong.

The video shows the results of a persistent driver who wouldn’t stop. A long trail left by the driver shows the Mercedes-Benz kept sinking deeper into the wet concrete until it was finally trapped in place. Reported as having occurred at night when the driver ignored warnings not to drive down this road, the video shows workers trying to dig the car out with a jackhammer during the day long after the concrete had set.

Nine News World reports this instance of schadenfreude happened in Guangdong recently, a popular sentiment welcomed by Chinese netizens in the classless world of China that does not officially distinguish between the rich and the poor.

While “stuck in traffic” appears to be the go-to pun for titles by reporting news outlets, there’s still a few more left for those wanting to partake in schadenfreude appreciation:

At the very least, the driver will never forget where he parked the car. 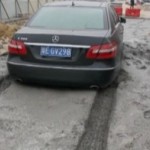 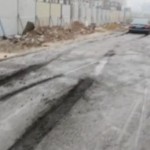 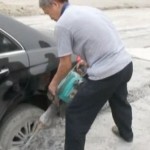 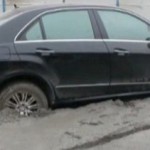