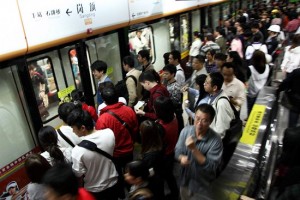 Is this the world's best?

We love CNNGo here at The Nanfang.  Since they launched a couple of years ago, they’ve been a great wealth of information on the markets they cover (such as Shanghai, Hong Kong, Singapore, etc.)  We are even fans, despite the fact the founder of our friendly competitors works full-time for them.

But today’s article left us scratching our heads.  The CNNGo team decided to put together a list of the top 10 metro systems in the world, and while we haven’t been able to try all of them, we question its ranking of the number one metro: Guangzhou.

Make no mistake, Guangzhou has a convenient and relatively clean system.  It connects to most of the necessary city hot spots, like shopping malls and train stations.  But best… in the world?  We’re not even sure Guangzhou’s is the best in the PRD, with Hong Kong’s famed MTR right next door.  In fact, the MTR Corporation was a consultant on the Guangzhou metro project when it was under construction.  While the MTR is generally considered to be among the top in the world, it didn’t place anywhere on CNN’s list.

Here’s what CNN had to say about the Guangzhou Metro:

After failing five times in 30 years to create a metro system, Guangzhou’s first metro line was finally opened in 1997 and a second line was opened in 2002.

Infrastructure investment exploded in 2004 when the city won the 2010 Asian Games. In the ensuing six years, the council spent RMB 70 billion (US$11 billion) on the metro system.

For going from absolute-zero in 1992 to eight lines, 144 stations, 236 kilometers of track and 1.2 billion passengers in 2008, and for the upcoming 48-minute express-trip to Hong Kong (opening in 2015), Guangzhou gets top billing on this list.

Those are impressive numbers, no doubt.  We don’t necessarily quibble with the accolades given to the Guangzhou metro, just that it’s the best on the entire planet.

For what it’s worth, Tokyo and New York City round out the top three, while Singapore comes in at number nine.