It seems there is nothing that can stop the disruptive behavior caused by Chinese passengers on international flights these days.

Yesterday morning at around 9 on Air China flight CA433 from Chongqing to Hong Kong, Chinese passengers started fighting. It began when two women objected to a crying baby behind them, while the baby’s mother was angry that the people in front kept reclining their seat. It erupted into flying fists not long afterwards.

Thankfully the airplane did not have to turn around because of the fight, like the Air Asia flight that returned to Bangkok after a Chinese couple threw hot water onto a stewardess.

Dealing with unruly passengers has become a problem. In this case, they were forced to pay a fine. But a tourist authority has threatened the Air Asia passengers with being put on a blacklist. There have been no criminal charges in either case.

Angry Chinese travellers seem to be popping up everywhere these days. In March, a video was taken of a fight between Chinese passengers when one’s luggage touched the other passenger’s foot. On a flight from Thailand to Beijing this past April, a fight broke out between three Chinese passengers over loud eating sounds in which cutlery was used as weapons.

If punishment can’t deter bad behavior by Chinese passengers, then maybe an appeal to their own personal safety will succeed where all else has failed.

Zou Jianjun, a professor at the China Civil Aviation Management Cadre Academy, warns against fighting on airplanes. Zou said the the balance and equilibrium of an airplane can be affected by physical altercations, and in serious cases can cause the plane to crash. 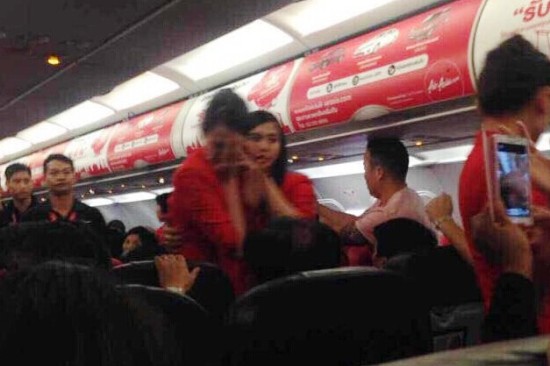 A couple of Chinese passengers that threw hot water on a flight attendant and threatened to blow up an Air Asia plane will be “severely punished” by Chinese authorities, according to state run media, which branded the passengers “barbarians”.

The Nanfang was first to report the story on Friday, when the discount carrier’s plane was forced to return to the Thai capital because of a couple of unruly Chinese passengers:

There were actually four passengers singled out for causing trouble, and they paid a fine of 50,000 baht (RMB 10,000) to the airline. All four are now being investigated by the Chinese tourism agency. 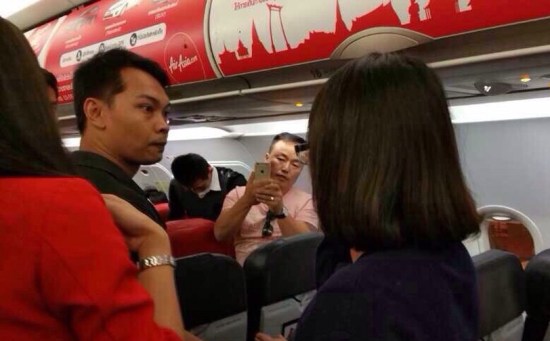 There have been several other incidents of mainland Chinese getting into violent confrontations on international flights this year.

In March, a video was taken of a fight between Chinese passengers when one’s luggage touched the other passenger’s foot. On a flight from Thailand to Beijing this past April, a fight broke out between three Chinese passengers over loud eating sounds in which cutlery was used as weapons. 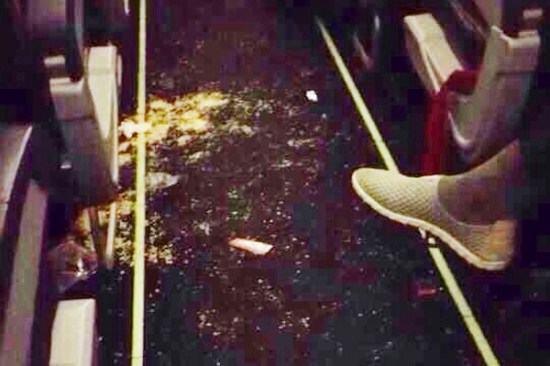 Here’s a video of the incident on Air Asia. Fellow Chinese passengers can be heard complaining he has “lost face”: 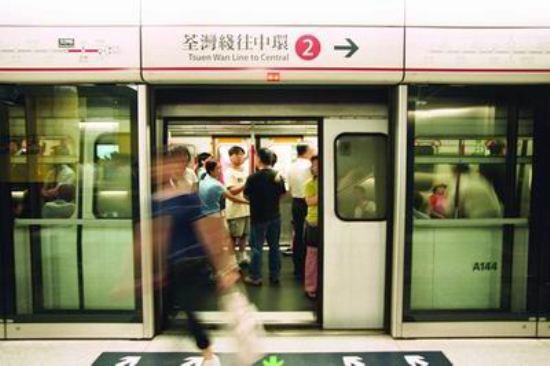 It’s not quite all the way to Lamma Island, but it’s a start.

Hong Kong’s newest subway extension may not be very long, but connects a vital and historic neighbourhood with the rest of Hong Kong island.

The MTR Corporation announced that the West Island Line will open on December 28. It will extend train service westward from Sheung Wan Station to the western end of Hong Kong Island and will make stops at Hong Kong University (HKU) Station and Kennedy Town Station.

The construction of a third station, Sai Ying Pun, is behind schedule but expected to be operational by February 15.

Train service from Sheung Wan to Kennedy Town is expected to take five minutes for the three kilometer journey.

HKU Station is expected to serve as a transfer station to a future expansion called the South Island Line. This expansion will be separated into two separate but interconnected lines that will start at HKU and ring through the island to connect with the Island Line at Admiralty.

This weekend, the MTR will open HKU Station and Kennedy Town station for public tours. Tickets can be obtained from Central and Western district council.

Here are two reference maps that show how the West Island Line will fit in with the future Island Line. To take a glimpse at what the entire future Hong Kong subway system may look like, click here. 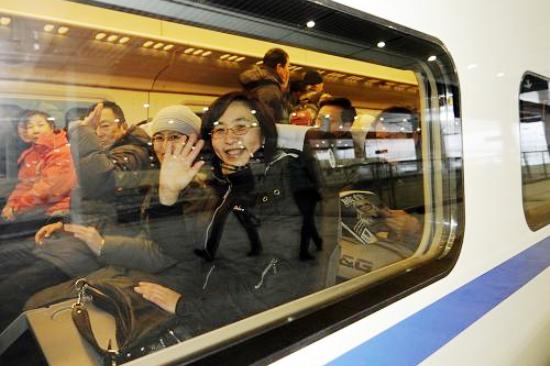 As well, direct service will be provided to fast trains going to Harbin, Shenzhen and Lhasa.

Starting December 10, it will only take six hours and 50 minutes to travel between Shanghai and Guangzhou. It takes 16 hours to use the old fashioned trains.

5,000 People Have Died in Traffic Accidents This Year Alone in Guangdong

The roads of Guangdong remain a dangerous place as newly released provincial statistics show almost 5,000 people have lost their lives in traffic accidents so far this year.

As of November 25, there were 23,527 traffic accidents in Guangdong, resulting in 4,816 fatalities, 52 of which involved three or more fatalities, totalling 192 deaths.

Surprisingly, these numbers are actually an improvement over last year’s figures, representing a drop of 4.6 percent.

By way of comparison, the roads in Guangdong are safer than the roads in the United States on a per capita basis. California, a state almost as big as Guangdong but with approximately 60 million less people, had 3,081 traffic fatalities in 2009, almost twice that of Guangdong.

For National Traffic Safety Awareness Day, which takes place December 2, provincial police announced they will be focussing on speeding, overcrowding, driving under the influence of drugs and alcohol, running red lights, occupying designated traffic lanes, and stopping inside pedestrian walkways.

The number of motorists in China continues to grow at an alarming rate, now exceeding 300 million.

The long-delayed fare increase for the Beijing Metro and bus system is set to officially take effect on December 28.

The adopted fare increase is the second option that was earlier proposed by officials. The other proposed option favored lower rates for commuters taking short distance trips.

Here’s a chart of the fare increases; the ones for the subway are listed first, then the buses:

Four thousand Beijingers clamoured online to buy 11 outrageously priced vehicles, all due to the fact that they had highly sought after Beijing license plates.

For the first time, the auction was conducted “Taobao-style” on the China Beijing Equity Exchange website. The cars were on sale for all of 12-hours, and immediately rose in value. The most expensive car was a Jaguar with an estimated value of RMB 310,000 that sold for a whopping RMB 465,000.

There is an intense demand for vehicle license plates in Beijing. While the purchase of a car is the most expensive part of driving in the nation’s capital, obtaining a license plate is often more difficult and time-consuming. Beijing drivers participate in a lottery that assigns license plates at random.

Demand for licenses increased after vehicle regulations were implemented in 2011, which restricted vehicle use depending on the license number. As a way to control traffic and limit carbon emissions, cars are prohibited from driving in Beijing if the last number in their license plate ends in a even or odd number.

Having served as the backbone of the Beijing subway system for more than 30 years, the ever-popular Line 1 is finally getting a modern upgrade: safety doors. Along with Line 2, the glass doors will be installed by 2017.

While newer subway lines — Line 6, 8, and the extension of Line 10—are equipped with glass safety doors, accidents still happen. Earlier this month, a 33 year-old commuter was killed when she became trapped in the safety doors at a Line 5 station. And while the new safety doors are certainly an improvement, it has been revealed that they lack infrared sensors which detect commuters walking towards them, and therefore don’t always open when they should.

With new infrastructure often comes new costs, and with the Beijing Metro continuing to expand, fares are set to be raised in the near future.

Beijing will be adding more subway lines by the end of this year to make it even easier to get around the city.

The new express line will connect Beijing Railway Station to Beijing West Railway Station, connecting the two main stations in only 10 minutes. This new line is scheduled to open on December 26.

Metro Line 7 also aims to alleviate pressure on the transportation infrastructure in the southern part of the city, particularly on Line 1 and the Batong Line. Line 7 will interconnect with Lines 4 and 5, although its major interchange will be with Line 10 at Shuangjing Station.

Below are maps detailing the new developments. First, the express line between the two train stations, and then the new Beijing Metro Line 7:

Plan Early: You Can Soon Buy Train Tickets in China 60 Days Ahead

Chinese trains are expected to fill up much earlier once tickets become available for sale 60 days before the journey, much earlier than the current 20 days. It will have all kinds of implications, particularly on those wanting to head home during Spring Festival.

The change will happen on December 1, which means train tickets for Spring Festival will be available in December rather than in January or even February.

Chunyun, the annual travel period that sees millions of Chinese return to their home towns and villages, is the largest mass migration of people in the world. An estimated 3.62 billion trips were taken during the 40 days surrounding this past Spring Festival.