A brutal crime that shocked the nation has finally come to a conclusion as five members of an alleged cult involved in the beating death of a woman at a Shandong McDonald’s restaurant have been convicted.

READ: Woman Beaten to Death at McDonald’s for
Refusing to Give Her Phone Number

A Yantai middle court passed down the sentences. Two of the members, Zhang Fan and Zhang Lidong, were sentenced to death. Lu Yingchun was sentenced to life in prison, while Zhang Hang and Zhang Qiaolian were given prison sentences of ten years and seven years, respectively. A sixth person involved in the crime is underaged and was not put on trial. The group of six, of which includes five members of the Zhang family, belong to the religious group “Church of the Almighty God”, labelled by the Chinese press as an “evil cult”.

On May 28, they had gone to a Zhaoyuan McDonald’s restaurant looking for phone numbers of possible new recruits. When a woman named Wu refused, Zhang Fan repeatedly beat her with a broomstick, calling her a “demon” while the rest of the group watched.

When police arrived at the scene, Zhang Fan was kicking at Wu’s body as his son kept striking her head.

In defiance of the convictions, Zhang Fan, Zhang Lidong, and Lu Ying all say they are not guilty, claiming they were simply acting in self-defense. 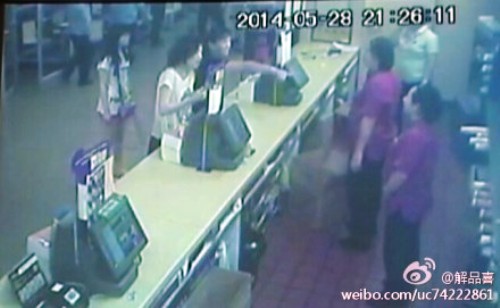 Zhang Lidong said in an earlier interview that his innocence comes from his religious convictions:

Reporter: Don’t you have any consideration for the law?

Zhang Lidong: None at all.

Reporter: Aren’t you afraid of the law?

Zhang Lidong: No, because I believe in God.

After the conviction, the family of the victim decided to drop a RMB 4 million civil suit against the group.

China is officially an atheist state that tolerates many religions, except when it comes to its own Party members. However, a campaign against “evil cults” has intensified in recent years.

Tagged: church of the almighty godCourtCultsDeathMcDonald'sreligionRestaurantsShandong

Shenzhen Man Crushes Baby After Rolling Onto Him While Sleeping