Miss Tan had a very simple dream: she wanted to leave China. When she married Mark, a UK national, she thought her dreams had come true. However, Mark had other plans.

Two years after getting married to Mark, Tan was forced to get a divorce after she spent the majority of their marriage by herself.

Tan met Mark online in July 2011, and the two met a year later when Mark came to visit her in China in November 2012. It must have been a good visit, because the two got married that same month.. Neither could communicate with each other well, and Tan later said she carelessly married Mark in order to leave China.

However, Mark left in December 2012 because his visa expired, leaving Tan, who lived in Liuzhou, on her own. Then the pair began fighting and holding grudges against each other, and grew distant

When seeking a divorce from Mark in June of this year, Tan ran into problems because her husband was not present. To process the divorce, the courts required Mark’s visa and marriage certificate.

However, Mark finally showed up and agreed to the divorce.

Tan was never able to fulfill her dream of leaving China. It is not known if she is now looking for foreigners for other opportunities.

Guilin’s famous Sun and Moon Pagodas caught on fire at 7:57 this morning, on the same day a national holiday kicks off that would have seen thousands of visitors. A tall plume of black smoke was seen billowing from one of its structures.

The Sun and Moon Pagodas were originally based on Tang dynasty designs, but were rebuilt in 2001. As a tourist attraction, it is famous for its night time display of gold and silver lights.

Firefighters have already extinguished the fire, and damage to the tourist attraction is still being assessed. A preliminary investigation says the fire was caused by an electrical problem involving the artificial lanterns used at night.

For comparison, here’s what the Sun and Moon Pagodas usually looks like:

Four schoolchildren are dead after being attacked by a suspect wielding a knife in Guangxi Province, reports the People’s Daily Online.

The attack took place at 6:20 am as the children were on their way to school.

Three of the children died at the scene, while the other was pronounced dead after arriving at the hospital.

The attacker hasn’t been caught yet.

UPDATE 1:25pm September 26: A suspect in the knife attack has been identified and announced by police, reports Southern Daily.

The suspect is named as Shi X Yan*, male, and is aged 56 years-old (pictured above). Shi is a resident of Gupu Village, Pingshan County. Shi is described as obese, and was driving a three-wheeled vehicle at the time of the attack.

Shi is now reported to have escaped to a mountain top located near Zhengling Village, Fozi County. Hundreds of police officers are reported to be working together to secure his capture.

* The name is partially censored

To celebrate the opening of a new building in Guangxi Province, a giveaway of free, live chickens was held for local residents, reports MSN. Chickens aren’t usually given away for free, so word spread far and wide. So far that around a thousand residents converged on the building in Nanning yesterday morning (September 21).

There were markings for people to line-up, but those were quickly ignored. It devolved into a lawless free-for-all. The mob’s insatiable demand for free, live chickens resulted in the toppling of a tent, causing many people to fall to the ground. After 15 minutes, the only thing left were some scattered feathers and shoes lost in the scuffle.

No one was injured from the melee.

For some Chinese, happiness is a new iPhone 6. For others willing to contend with unruly crowds and wanton disorder, there is happiness to be had at this giveaway—at least for those lucky to have gotten a free live chicken of their own. 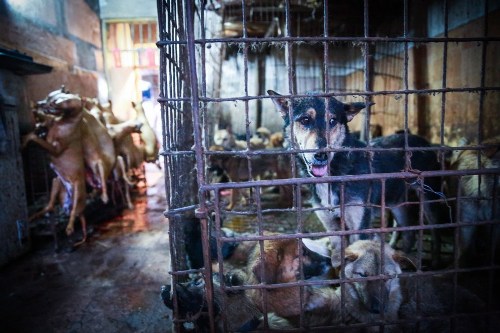 Despite taking the proper precautions to prevent such conflicts, a restaurateur in Guangxi Province was targeted by several animal activists trying to forcibly release captured dogs from his restaurant, reports the Yangcheng Evening Report.

According to a Xinmin Community report, 10 unidentified people from Guangdong, Nanning and Guangxi clashed with local residents in Yulin over the treatment and capture of dogs used for their meat on June 10 at around 8am. 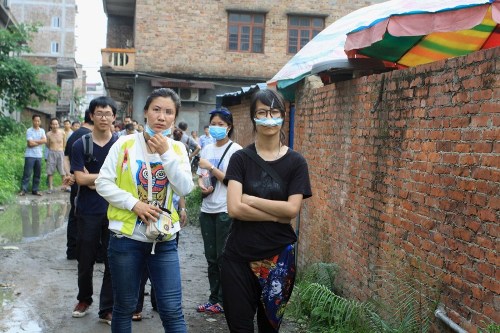 The activists first got into an altercation with a merchant, and tried to throw food at the trapped dogs. When that didn’t work, the activists alerted police.

However, the activists weren’t happy with police and municipal food inspection workers so they kicked down the merchant’s door despite him showing his certificate of quarantine.

The animal activists have all been detained by authorities. 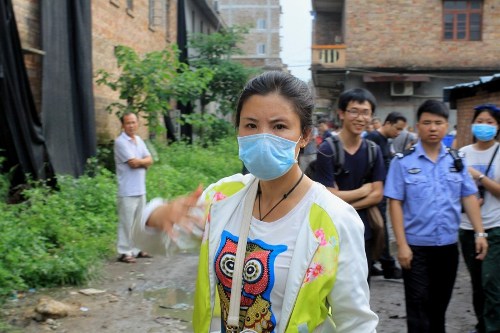 Yulin has been trying to prevent these kinds of disputes.

To keep from drawing attention from activists, restauranteurs were told to remove the word “dog” from signs and menus, refrain from slaughtering dogs in a public place (such as in the middle of the street), and not to hang cooked dog meat in front of the store.

Here are some censored signs that don’t have the character “dog” in them: Right above the woman are the words “Live roasted x“. The censored words are in the middle of this sign: “House specialties: x, mutton” Most city restaurants have complied with the guidelines, but some residents who are proud of their dog-eating ways are upset.

Yulin resident Mr Liu said the “dog” character in signs should not be hidden:

We haven’t done anything illegal, why must we eat dog meat on the sly?

Soon no Yulin resident will have to be shy about their taste for canines. On June 21, the Summer Soltice Lichee Dog Meat Festival will take place in Yulin. Last year, it was estimated nearly 10,000 dogs were consumed during the festival.

Animal activists have proven to be influential in shutting down similar events. In 2011, the City of Jinhua in Zhejiang Province cancelled its dog eating festival due to public pressure. 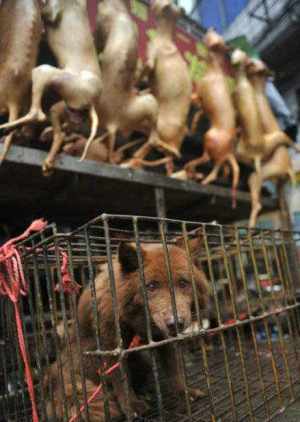 How far would you go to save a monkey?

How cute would an animal have to be to inspire an old man to lick its butt? Wuhan Evening News was told that a small monkey in Wuhan made his keeper do just that on Monday.

Zhang Bangsheng, who is an expert on monkeys, spoke to the paper on Monday. Zhang, who’s in his fifties, was washing the 3-month baby presbytis francoisi with warm water, then began to lick its anus with his tongue until finally a small piece of feces came out. Looking at the feces, Zhang smiled with relief.

It is said that the baby monkey is the first presbytis francoisi the zoo has kept in decades. Presbytis francoisi, a national protected species, is a rare primate from Guangxi and Guizhou provinces.

On the second day of the Labor Day holiday, Zhang discovered the monkey was constipated after swallowing a whole peanut without chewing. The monkey’s life would be in danger if it could not pass the peanut quickly. The monkey is too young to take a laxative so the only method was to directly stimulate its sphincter.