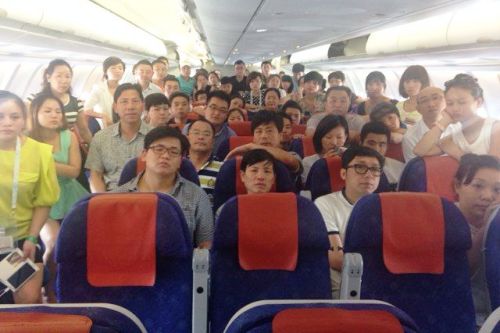 When your flight is cancelled, then that’s it: you’re not going anywhere. But for a group of mainland tourists, the decision to “not go anywhere” doesn’t necessarily have to be made by the airline.

It was 9pm on June 20, and the departure of Hong Kong Airlines Flight HX234 from Hong Kong Airport to Shanghai was in jeopardy. The air traffic control at Pudong reported bad weather and ordered the plane to delay take-off.

So the plane waited for permission to depart while still idling at its original position next to the passenger terminal. For hours. At 2am, passengers began to request to leave the plane, but it wasn’t until 3am when the captain announced the flight would be cancelled, a full six hours after the original departure time of 9pm.

At this time, Hong Kong Airlines offered its 276 passengers HK$200 in compensation, dinner and breakfast vouchers, along with a flight to Shanghai later. Around 130 of the already boarded passengers accepted this offer, and disembarked the plane. However, about 70 passengers rejected the terms, and refused to leave. 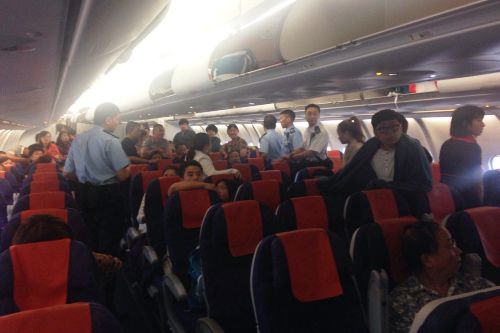 Here’s where this story takes wildly different turns depending on which side of the Hong Kong-Mainland boundary you’re on.

The People’s Daily reported that the passengers had nothing to eat or drink for the entire 16 hours, during which the air conditioning was reported to have been turned off. The paper said the airline staff also left the plane during the passengers’ protest. 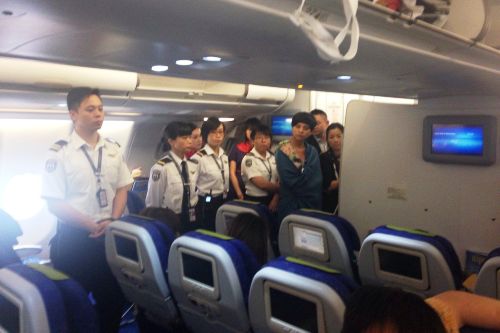 On the other hand, the airline states that water was provided to passengers throughout the incident, during which time the air conditioning was on, reports the Hong Kong Standard.

But it gets uglier. Passenger Mr Hua said the protesters were not seeking compensation, but rather wanted to complain about how they were being treated. But airline staff have a different story.

Stewardess Candy Tong made a post on Instagram in which she affirmed that airline staff gave food and drink to the passengers. Furthermore, Tong stated that during the delay, airline staff had lent passengers their own personal cell phone chargers. Passengers used their recharged batteries to take pictures of the flight attendants.

The following photograph was posted to Facebook with the text, “#1320 Thanks for telling me there is no food and drinks in HX 234.” 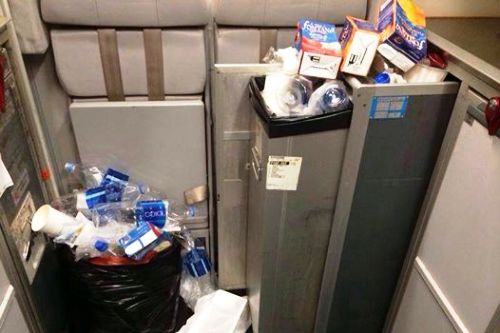 The whole standoff finally came to an end at 3pm on the 21st — after passengers had stayed on the flight for a full 18 hours — when Hong Kong Airlines decided to increase compensation to HK$800 per passenger.

A “language strike” by Hong Kong Airlines flight attendants is now planned for July 1 in which staff will refrain from speaking Putonghua. July 1 is also the annual day of protest in Hong Kong, which also coincides with its handover of sovereignty back to Mainland China. 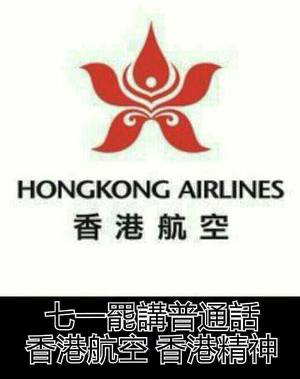 This week, a mix of good and bad news for the Pearl River Delta airspace. 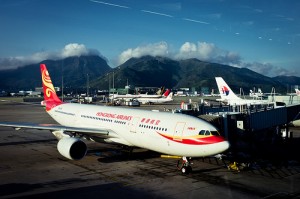 HK Airlines dumps loss-making London service
Hong Kong Airlines seems to be in a tailspin. The airline already cancelled its all-business class service to London Gatwick only seven months after it announced the service amid much fanfare.

All tickets from September 3 were shown as sold out last week, which raised speculation the London route was about to fall under the axe. Poor planning and miscalculations have led to the service being “deep in the red” ever since the launch, according to the SCMP.

The operating cost of the 14-hour flight is estimated at HK$3 million, including fuel costs, crew allowances and inflight meals.

Insiders said the carrier burns about HK$1 million to HK$2 million a day on the service and around HK$10 million a month. The monthly losses are lower than they would normally be because the airline cancels the services from time to time depending on the demand.

The company blamed troubles in Europe for failing to lure passengers away from Cathay Pacific and British Airways.

In the days leading up to the cancellation of its London service the airline was cited by regulators for poor service, blocking any expansion to the fleet.  According to Reuters, this lead to HK Airlines cancelling its $3.8 billion order for 10 Airbus A380s.

It sounds like a very diplomatic way to say that we think your safety standards are slipping so, until you can show us you can handle any additional aircraft being added to your fleet, we would not approve it.

And the airline is still reeling from Typhoon Vicente, taking over a week to clear the backlog of passengers caught up in the worst storm to batter the South China coast in 13 years.

The final flight will pick up Hong Kong’s Paralympians, as the official carrier for the athletes, from London on September 10. 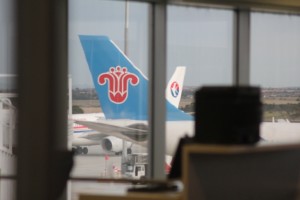 Kangaroo versus Canton? The battle of the skies heats up
Guangzhou’s China Southern Airlines (CSA) is bringing out its best aircraft for its new Sydney-London route, adding pressure to competitors in the battle for passengers, profits and prestige.

CSA president and CEO Tan Wangeng told Australian Business Traveller the airline’s new 787 Dreamliner will be deployed on the route.

We will spare no effort in building the Canton Route into a premium product, using new Airbus A380 superjumbo and Boeing 787 Dreamliner aircraft.

The news will cause some concern at Qantas, where its struggling international outfit, including that of their Kangaroo Route via Singapore, faces stiff competition against the likes of Singapore Airlines, Cathay Pacific, Emirates and more.

China Southern will be the first airline to utilise the aircraft in British and Australian airspace beating both country’s own flagship carriers.

Japan-China seal Open-Skies deal
Japan and China have signed a new air deal boosting the number of flights between the two countries, liberalising the Sino-Japan market.

The deal, announced on August 8, will see new routes and increased frequencies which include Guangzhou-Tokyo Haneda for the first time. The pact has already roused interest with many Japanese-based airlines eyeing new departures to China.

Ethiopian u-turn on 787 service to Guangzhou
Ethiopian Airlines has dropped plans to deploy its new 787 Dreamliner to Guangzhou. While not good for passengers, it will be good news for China Southern which will have the honour of being the first carrier to utilise the newest aircraft in the mainland. 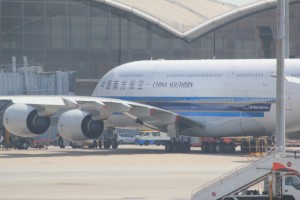 China’s major airlines are heading into some turbulence: slowing traffic, government controlled jet fuel prices, and the depreciation of the RMB are all dampening aviation ambitions. It seems most major airlines are issuing profit warnings, too. Despite the problems, it seems there’s never a shortage of new routes being opened up, especially down here in China’s manufacturing hotbed.  Here is a round up of the latest news around the airlines affecting the Pearl River Delta.

China Southern ramps up London service
It wasn’t long ago that China Southern Airlines (CSA) launched their new Guangzhou-London service, and they’re already increasing the frequency of flights. Starting October 28, Heathrow will get daily service from Guangzhou, the only non-stop flight between the two cities.

Shenzhen starts-up Sydney service again
Hainan Airlines is returning to Sydney, Australia once more starting October 29 after a near nine-month hiatus – also making it the furthest international destination from Shenzhen to anywhere in the Asia-Pacific, let alone the world.

Starting September 24 there will be extra flights from Guangzhou to Ho Chi Minh City, Singapore and Yangon. Ho Chi Minh goes thrice-daily, Singapore has been increased to four-a-day while Yangon temporarily doubles to four-a-week until October 26. Finally, starting October 1, twice-daily service resumes on the Guangzhou-Manila route after passenger traffic took a knock over rising political tensions between the mainland and the Philippines earlier this summer. 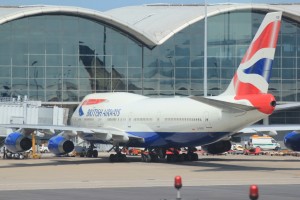 Winter is the time of year where wings are clipped in the northern hemisphere as far as long-haul goes. British Airways are keeping to its 14 weekly departures from Heathrow, previously aiming for 17, while European rival Lufthansa reduces daily departures to a five or six flights a week service.

And in recent weeks, Hong Kong has been hit by strikes at Air India. While there’s been a resolution, flights from Delhi to Hong Kong and onwards to Osaka Kansai and Seoul Incheon are still suspended until September 1.

Emirates A380 Hong Kong u-turn
The Dubai-carrier has backed out of plans to introduce a 14-weekly A380 service to Hong Kong. It will stick to its previous seven A380 departures via Bangkok, with four other aircraft going to Hong Kong non-stop.

There’s still hope
It’s not all bad news in Hong Kong. Hong Kong Airlines is boosting services to Shanghai Pudong starting August 1. Its introducing an extra three flights on top of the 14-weekly in an all-new business class only flight. And from September 10, the number of flights will rise to 21 a week.