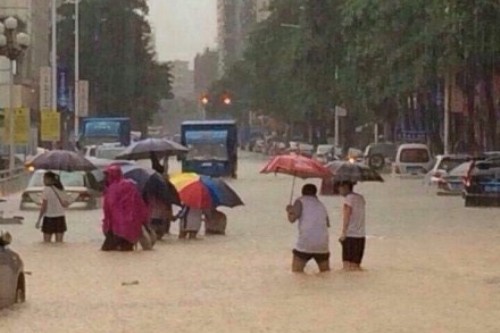 Blue and yellow weather alerts have been issued for the city of Guangzhou for Wednesday afternoon after heavy rain battered Shenzhen on Tuesday.

Though the red alert weather warning was lifted at 4:30pm, flooding had occurred throughout the city of Shenzhen. Cars tried to pass through submerged roads as residents waded through flood water higher than their knees.

In Leizhou, a levee was reported to have burst early this morning.

Rain is expected to continue to fall on Guangdong Province for the remainder of the week.

Here’s a gallery of pictures taken yesterday of the flooding in Shenzhen: 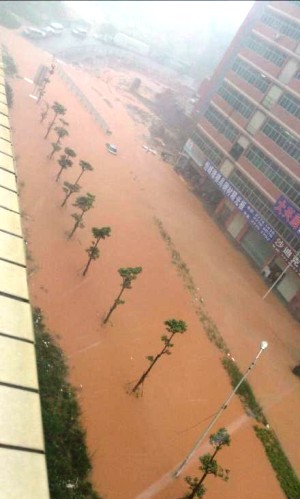 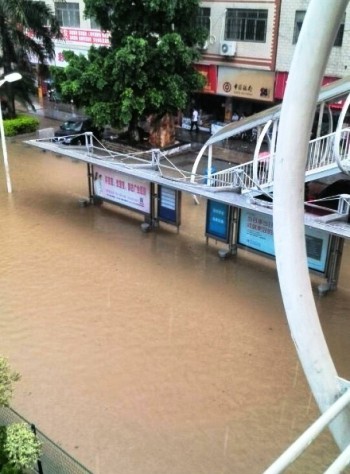 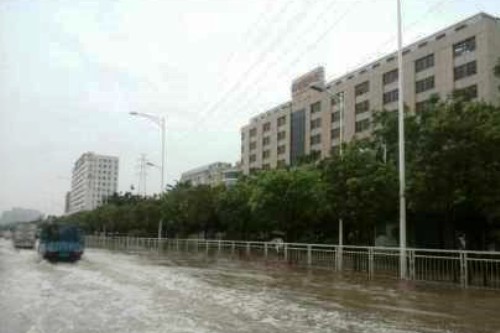 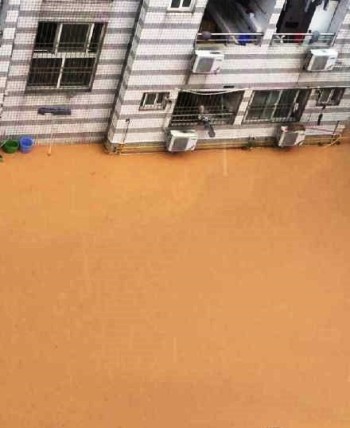 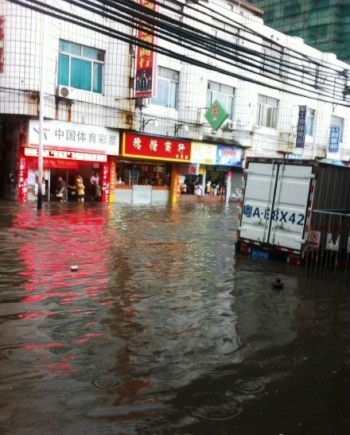 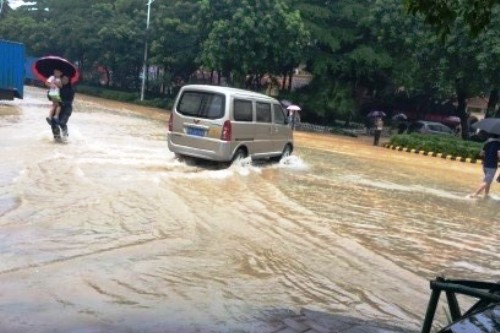 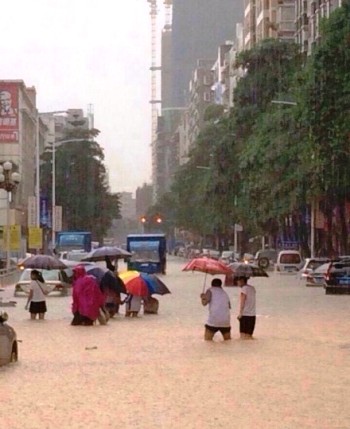 And here are some pictures from Baihuatong Road in Guangming: 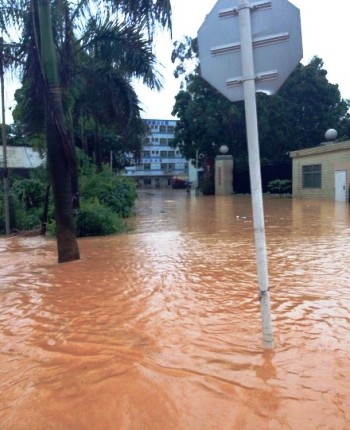 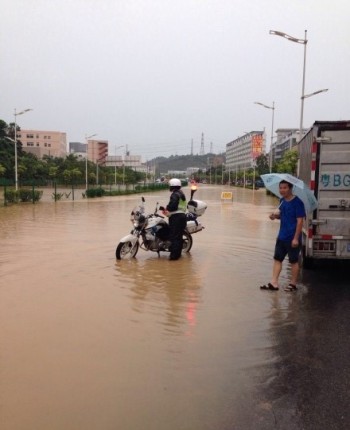 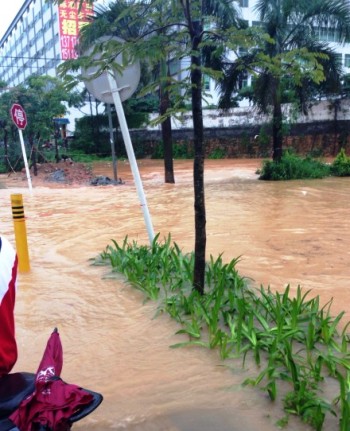 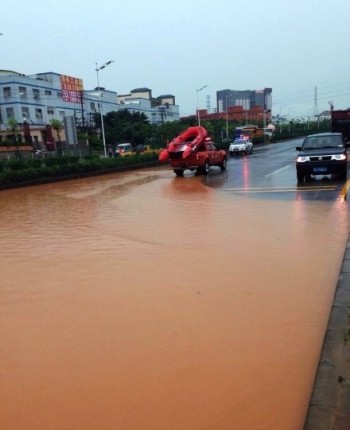 It would be remiss not to mention the rainbow that finally appeared yesterday on “520″, the month and day imbued with the numerical symbology of “I like you”: 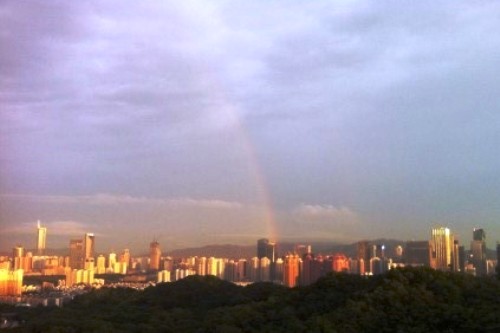 Related stories from the past month:

At some point in a conversation, you may have been told the phrase: “That comes from China, you know.” Agriculture? Invented in China. Mixed martial arts? Originates from a little temple in the woods — in China. Farmville? Yup, China again.

Well, there’s something else that comes from China — pollution. Long a health hazard to Mainland residents and attributed behind the high numbers of lung cancer in Guangzhou, it turns out that the other byproduct of an economic boom besides a high GDP now has severe international implications.

The deadly rainstorm that rocked the PRD may be an example of more extreme weather to come. A study published in the Proceedings of the National Academy of Sciences (PNAS) states that air pollution originating from major Asian cities like smog-ridden Bejing may be influencing weather patterns around the world, reports the BBC.

Yuan Wang, a member of the Jet Propulsion Laboratory at the California Institute of Technology and lead author of the study, said air pollutants from China blow to the north Pacific where they cause clouds to grow denser. In this way, more intense storms are created above the ocean and lead to extreme weather conditions elsewhere in the world.

Furthermore, Chinese pollution is also directly influencing air quality throughout other parts of the world. The Smithsonian reported that between 12 and 24 percent of the sulfate-based air pollution in circulation over the Western U.S. originally came from China.

But China is the gifter that keeps on giving: it isn’t just air pollution through which China is influencing international weather patterns, but water pollution that is making the mouth of the Pearl River Delta blush a crimson red.

Sewage from the Chinese mainland is giving rise to “red tides” in Hong Kong harbor, the SCMP reported. The Pearl River is said to be the origin of red tides along with Mirs Bay to the east. Phosphates and nitrates commonly found in mainland city waste water serve as nutrients for the algal blooms, allowing it to prosper in the right conditions.

“The economic boom across the border leads to more sewage discharge into the sea and rivers, and in the right seasons [the nutrients] come down to us. So this is no longer a local phenomenon but a regional one.”

Besides leaving 15 confirmed deaths in its wake, the recent storms in Guangdong have also left behind a legacy of leaks and drips. For apartment owner Miss Liu of Pengdayu Xihu in Huicheng District in Huizhou, fixing a leaking crack in the ceiling would only make things worse when it started to drip “a thick, yellow goo”, reports Nandu.

Using keys to enter the unoccupied apartment above, Miss Liu discovered that a crack in the floor was being fixed; screws were forced into the crack which was then filled by a yellow gluey substance. As explained by a representative of the building’s property management, the water leak came from a pipe running along the area that hadn’t been properly water-proofed. When using high-pressure jets to mend the crack, it may have been that the pressure was too high and caused a leakage to the apartment below.

The property management representative said: “Many apartments have this same problem. It does not affect one’s safety in the least.” This is apparently supposed to help homeowners and residents to rest easy. If a pipe can’t hold in water or a repair can’t actually fix the problem, at the very least Miss Liu will be able to keep this “thick, yellow goo” that has fallen on her floors. For free. 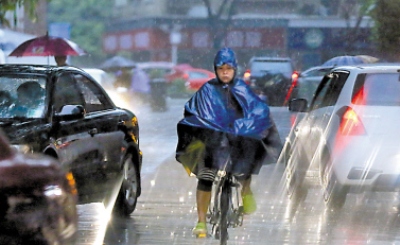 Here’s our round-up of some Guangdong and specifically Shenzhen rain-related stories from the past couple of days:

The number of deaths caused by the storm throughout Guangdong has risen to 14 as of this morning with 3 victims still missing, reports SZ News. The government states that a total of 3,902 people have been evacuated, and the economy is estimated to have suffered a loss of RMB 199 million.

The storm is the cause for the sinking of three fishing boats, leading to the death of one person and the disappearance of another.

Shenzhen Bao’an International Airport reports that there are currently no more delays and that all of its flights are back on schedule. This is after the airport had issued its first ever red alert for delays, leading to the cancelling of over 200 flights and the rerouting of over 100.

What’s On Shenzhen reported that the 250 passengers of a Dragonair flight re-routed to Shenzhen from Hong Kong were forced to remain in the parked plane overnight. One passenger had said, “We were on the tarmac from 10 p.m. last night to 7 a.m. this morning. Passengers were told to leave the plane and find their own way to Hong Kong without any stipends for travel.”

Additionally, a Shenzhen airport spokesperson emphasized that the leaking at the airport is not as serious as reported on Weibo. The spokesperson stated that those pictures only show the parking garage, whereas there are only a total of over 20 leaks that have been counted in the roof of the new airport terminal.

Shenzhen has received an average of 125 mm of precipitation since the start of the storm, while the heaviest has been 318 mm. The most has been at Hongshulin Station, in which 115 mm of rain were collected within one hour.

Weather reports are saying that the rain, hail and wind will continue for the next few days. Stay dry, people.

Two people are electrocuted during rainstorm in Guangzhou, both died

A 40 year-old woman and a 26 year-old man were electrocuted during a rainstorm in Guangzhou’s Zengcheng District on Sept. 24, Southern Metropolis Daily reports.

It was raining heavily when Zhao Jinghua, 40, sprinted along Xizhou Avenue to take an umbrella to her son who works in the same factory as her. Because she was close to home, Zhao was only wearing slippers and fell in a puddle near an electric cable at 6:30 p.m.

A passer-by attempted to rescue her but did not want to touch her. A nearby restaurant owner got a pair of rubber shoes and rubber gloves so somebody could try to pull her out without endangering themselves. But she died instantly, paramedics confirmed.

Minutes later, a 26 year-old man slipped near the same puddle and was also electrocuted.

Officials attributed the death to a leakage of a nearby electricity cable.

The investigation is ongoing.