Chinese women are being “advised” by the good men at the police department on how to keep themselves safe while away from home (while studying abroad or even just going out for a night at the neighbourhood pub). The sage advice includes “never get drunk in public” and “never trust anyone”, among other pearls of wisdom.

This 14-part list, which is circulating on Weibo, was apparently compiled by a retired police officer to best assist female Chinese university students:

The 14 Admonitions Bestowed by Your Civil Police “Papa”

1. “There is no such thing as a free lunch” (the Chinese saying involves a pie falling from the sky). Remember, only rain and bird excrement fall from the sky. A charlatan will try to paint a pretty picture for you; but, what they are actually doing is digging a deep hole for you to fall in.

2. Never persist in trying to get everything for cheap. Remember the old saying, “Disaster looms for those that are spendthrifts”. When a stranger treats you to dinner or a drink, or gives you a present, simply refuse the offer. Be on guard for drugs put into food, or for gifts to contain illegal substances or concealed electronic (spying) devices.

3. Never believe anyone that calls themselves a police officer, official, bank personnel, social security personnel or public worker on your phone regarding matters of crime, winning a prize, or tax return. Never turn off your phone because of their threats. Upon encountering this kind of situation, you should first hang up, then immediately call your parents, and then call 110 (emergency services).

5. Never get inebriated in a place outside of your home. This is an iron rule for women because you will risk losing your morals, your etiquette, your indiscretion, your heart and even your virginity (!)

6. Be vigilant of stranger’s cars or public vehicles without proper identification. Upon entering the vehicle, you will lose the opportunity to resist or escape the car once the car gains speed and the narrow passenger space is locked.

7. Be vigilant while outside the school campus, in public spaces, while striking up conversation, asking for directions, or money, and using your phone. When using public transportation, especially when travelling alone, do not provide your phone number, or accept invitations from a fellow traveler.

8. Do not believe that you will meet your Prince Charming. This is an iron rule for girls. Instead, the basis and guarantee of a good marriage come from having similar family backgrounds, education and life experiences as well as suitable careers and salary.

9. Before setting out on your journey, be sure to inform your parents of your destination, time of arrival, and any traveling companions. While traveling,
you should be sure to first always keep open communication, then, always safeguard your cash and bank cards; and lastly, be sure to stay in reputable accommodation, such as a national hotel chain.

10. Never reveal your wealth to outsiders. Remember the old saying regarding this. Don’t show off your wealth in a public place, otherwise two things will happen as a result: you’ll become the focus of interest for bad people, and secondly, you’ll lose respect from everyone else. At the same time, don’t be caught by the allure of other people showing off their wealth. First, people that are in fact rich won’t want other people to know about it; secondly, other people’s money don’t belong to you.

11. Always remember, only by remaining level-headed will you be able to save yourself. By remaining calm you will be able to think clearly and find the best way out of danger. When you are threatened by a bad person, the more they put on a threatening display, the more they are afraid inside. Should this happen, don’t be afraid, remain calm, try to appease the bad person, and look for an opportunity to escape.

12. Do not randomly add people to your QQ friend list. Do not believe people on the internet who say they are lovesick, ill, dejected, or alone. Do not allow yourself to be swayed by their proud and aloof nature, their search for freedom, or their stories of hardship. Whenever a person online asks for money or some kind of financial help, never give them money. Instead, put them on your blacklist.

13. No matter what happens, if you are encountering danger, getting into trouble, or you have lost contact with your family and friends, you should always remember to call 110 for help.

We look forward to seeing the police safety list for young Chinese men going away to university. What will keep them safe?

UPDATE 5:41pm June 9: Pictures from the scene show that a large hole has been made in the wall of the apartment from the blast, while an interior wall is described as having collapsed.

An explosion in the City of Chuxiong in Yunnan Province has left three dead and four injured, Xinhua reports.

A report from the Chuxiong People’s Government said that the explosion occurred at 2:30am today (June 9) at the Yunnan No. 5 Public Highway and Bridge Construction Company on 64 Xiyun Street in the Chuxiong Development Zone. The specific location of the explosion is named as apartment 401, building 3 and is located in an adjoining neighborhood to the company grounds.

All injured victims have been taken to hospital for treatment. The cause of the explosion is under investigation.

This is an infographic that was published on the Sina News portal on May 22, the same day that an attack occurred in public market in Urumqi, Xinjiang that killed 31 people and injured more than 90.

The infographic itself has been separated into several portions. We’ve gone ahead and done a translation into English, as a public service (of course).

Terror attacks have occurred again in Urumqi, Xinjiang in which the [loss of] life reminds us that we must remain vigilant at all times in public places. Even though the chance of getting involved in a terrorist attack is less than winning the grand prize in a lottery, we should nonetheless prepare ourselves with survival knowledge and tips in order to make losses as minimal as possible.

Upon encountering a violent attack, please keep THESE six points in mind!

1. When encountering such an incident, don’t just stand around and be a spectator.

2. Do not provoke the person committing this violent attack; by all means, do not scream or yell in a horrified way.

3. If there is no way to escape the violent attack in a public area, find a large-scale object to hide in or cover you, and lie down.

4. Try to maintain a calm composure and observe the present situation at the scene. When the time is right, withdraw from the scene to a remote location.

5. Don’t take out your smartphone in order to take pictures, post a microblog, etc.

6. Remain flexible to take whichever course of action necessary depending upon the present situation.

Upon Encountering an Explosion, Do the Following

If a bomb has exploded, stabilization is the most important thing.

First step of self-preservation is to get down.

Find cover as this will greatly reduce your chance of getting hurt from flying debris as well as prevent inhalation from any harmful gases.

Observe if there is going to be a secondary explosion and any further injuries. Don’t run around in a panic: this may easily be what the perpetrator of the explosion wants you to do, and could result in more people getting hurt.

If you are on fire, don’t run around; instead, extinguish the fire by rolling around on the ground or use heavy clothing to suppress the fire. Do not waste any time worrying about your personal effects and belongings instead of escaping from the scene.

Upon Encountering a Gun Attack, Do the Following

First Step: Get Down

Quickly cover yourself; quickly have your body adopt a low position. Use every possible single object in your environment to shield yourself.

Do not attempt to outrun the bullets.

The cover you select can save your life.

The best cover is that which is in-between you and the terrorist.

Objects That Can Shield Your Body and Act as Cover

Objects that can easily conceal a body. For example, a pillar.

No: Lamp posts, trunks of small trees, fire hydrants (as their volume is too small, these items can not sufficiently cover your body).

No: Small hills, ornamental stones (not standardized, easy to be affected by bullets)

Walls, pillars, large tree trunks, the engine block at the front of a car, tires, etc.

Upon Encountering a Robbery, Do the Following 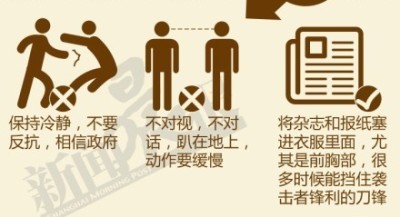 Stay calm, do not resist, trust in the government.

Don’t look or talk to them. Lie on the floor. Movements should all be very slow.

Stuff newspapers and magazines into your clothes, particularly into the area in the front of your chest. Often, this is able to defend against knife attacks made by the attacker.

Try your best to keep and conceal any communication devices you have, and promptly set them to silent mode. At the appropriate time, use a text message or other method to notify the police (110) to call for help. The main content of the message should be your exact location, what condition people around you are in and how many people there are, how many terrorist there are, etc.

Pay attention to how many terrorists there are, who their leader is; later, at the appropriate time, provide your evidence.

At the instant that police make their move, try to get down on the ground as best as you can. Under the cover of police, leave the scene.

Upon Encountering arson, Do the Following

Do not lose control and panic, blindly scream and yell, be worried about any personal belongings, recklessly open windows and doors, take the elevator, run around however you’d like, jump off a building. 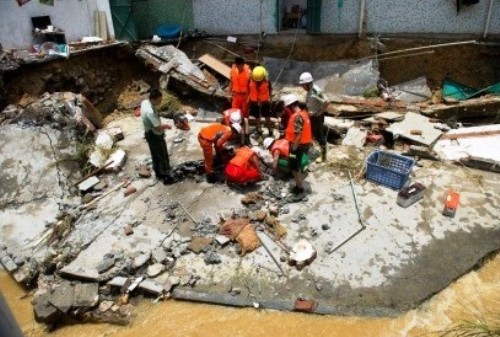 The heavy rains and flooding battering the Pearl River Delta and the east and north of Guangdong Province has taken another fatality, bringing the total number of victims to six.

Early on May 17, a landslide caused the destruction of a house in Taiyang Village, Shijing Community and swept away and killed a woman who was eight months pregnant.

From 1am until 4am, the total precipitation in Pingshan District, Shenzhen was recorded as 261mm. A local tributary of the Pingshan Creek was already swollen from days of rain by that time, leading to the landslide.

RELATED: Two Dead, One Missing as Dongguan Teens Swept Away by Floodwaters

The victim, 21 years-old and surnamed Zhong, lived in a house located next to Pingshan Creek that was destroyed by the landslide. Her father said he held on as tightly as he could until his own arm was injured, while the husband had said that there was no way to help her because the torrent was “too strong”.

Zhong’s body was found later that day at 5pm at a central drainage pipe.

The recent rain that has hit the cities of Huizhou, Shenzhen, Shanwei, and Qingyuan
is expected to continue until tomorrow. 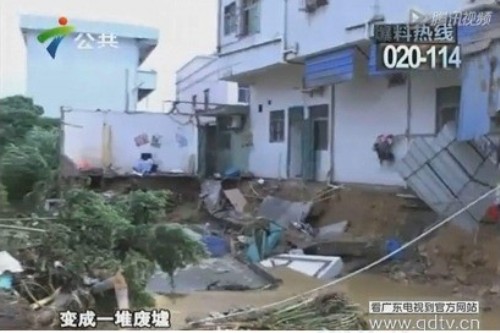