Wukan, the village outside Shanwei which went from protests against land corruption to eviction of CCP and government officials late last year, was back in the news this week as villagers there voted yesterday to establish an independent election committee to oversee another election scheduled for March 1 for new village leadership. Voter turnout was reportedly higher than 80%, spurred in part by the knowledge that those elected to the committee won’t be eligible to stand in next month’s village election.

“After this, whoever says Chinese people aren’t good enough for democracy, I’ll sue the bastard,” wrote one online spectator of the election.

The name of the village is no longer blocked on Sina Weibo, a likely indication that our masters in Beijing have given at least tacit approval for discussion of the news—which, perhaps unsurprisingly, has also been covered by media here in Guangdong and in Beijing.

Yangcheng Evening News has run a series of photos from Wukan yesterday which it attributes to The Beijing News, but appear elsewhere to belong to Reuters.

Voting lasted from 9am to 11pm, putting 10 men and 1 woman in charge of next month's election.

People showed up at 7, the flag went up just after 9, and anyone over 18 was free to cast their vote.

Ballots were cast at the local elementary school, where teachers and students were recruited as volunteers for logistical support.

Firecrackers were set off at 2pm to mark the start of the afternoon voting session.

One Wukan teacher voted on behalf of more than 50 elderly villagers.

No votes for you, northern kids. 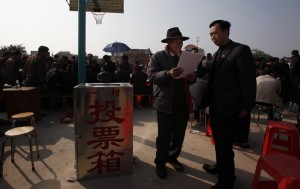 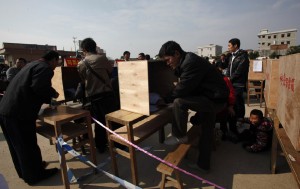 Sunlight is said to be the best of disinfectants.

Grassroots democracy is so fabulous. 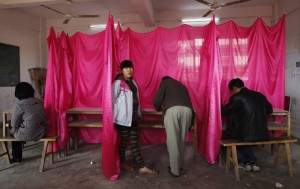 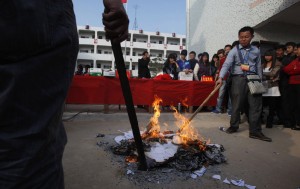 This entry was posted in Featured and tagged election, Wukan. Bookmark the permalink.