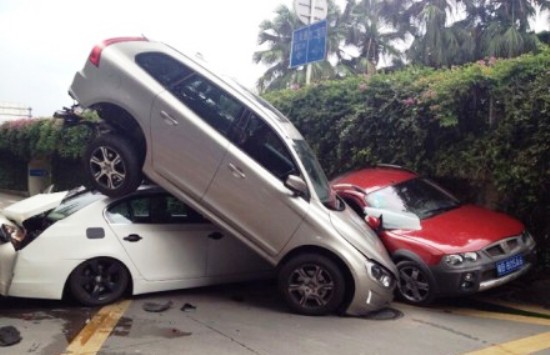 Another sports car has been involved in a traffic accident in the Pearl River Delta.

This time a Maserati GTS collided with an electric bike, injuring two people, at around 1:20am on July 26 at the intersection of Wanghai Road and Wanxia Road in Shenzhen, according to a post on the official Weibo account of the Shenzhen Traffic Police.

The driver of electric bike, Heng, and the passenger on the bike, Huang, were the two people on the bike. Not surprisingly, the accounts of what happened differ.

Three dead after electric taxi in Shenzhen explodes over the weekend

Questions are being raised today over the safety of Shenzhen’s much-vaunted electric taxis, which are manufactured by locally-based BYD.

Just after 3 o’clock on Sunday morning, a man driving a Nissan GT-R slammed into a BYD e6 electric taxi on Binhai Dadao.  The driver, who witnesses say was drunk and speeding, fled the scene before turning himself in later yesterday.

The taxi, though, caught fire within seconds, incinerating the driver and his two female passengers before they had any time to escape.  Some are now wondering if this would’ve happened had the taxi not had a huge and possibly fully-charged battery inside.  From the South China Morning Post (paywall):

Lo Kok-keung, an engineer with the Department of Mechanical Engineering at Hong Kong Polytechnic University, said that a fully charged lithium battery could explode in a serious crash.

“The crash could result in a short circuit, which, in turn, could make the battery hot and eventually explode within a matter of seconds,” Lo said. “This is the major hidden danger of electric cars that doesn’t exist in vehicles that consume petrol.”

The Nanfang told you earlier that plans are underway to rapidly expand the number of electric vehicles in Shenzhen:

Named the E6, the vehicle offers enough space for five passengers and has a range of some 160 kilometers. Plans are currently being put into place to convert all of Shenzhen’s public vehicular transport to electric – including buses and all taxis – over the next five years.

All existing gas (petrol) fuel stations in the city and its suburbs are currently being upgraded to include rapid electric charging systems.

One wonders if safety concerns may eventually put the brakes on these plans, at least temporarily.